Ravi Teja's movies are all about that energy and just like his quirky roles, his songs are also always peppy. Listening to any Ravi Teja song can put you in a good mood in an instant 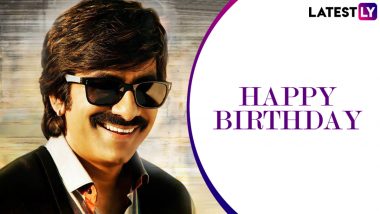 Ravi Teja has been entertaining his fans for the longest time now. Be if his action avatar or his energetic, comedy self in films, his fans love to see the superstar on the screen. Ravi kickstarted his career with an appearance in the Telugu film Karthavyam almost two decades ago. He went on to do supporting role for quite some time and bagged his first lead role in 1999. He was the hero of  Nee Kosam, where he starred alongside the beautiful Maheshwari. He even bagged the Nandi Special Jury Award for his acting.

After this, there was no stopping him. He went on to feature in films like Itlu Sravani Subramanyam, Idiot, Venky, Naa Autograph, Bhadra, Krishna, Kick, Shambo Shiva Shambo, Mirapakay, Power, Bengal Tiger, Raja the Great, and Krack. Apart from this, Ravi Teja was also listed in the Forbes India list of top 100 Celebrities. He bagged the 50th position on the list. He also worked as an assistant director in his initial days to understand the craft.

Ravi Teja's movies are all about that energy and just like his quirky roles, his songs are also always peppy. Listening to any Ravi Teja song can put you in a good mood in an instant and as the actor is celebrating his 53rd birthday today, we decided to make you bust a move on some of his grooviest songs. Check them out here:

Mass Biriyani is an upbeat track from the movie Krack. The film starred Shruti Haasan alongside Ravi. The actor looked dapper in this song and his chemistry with Shruti is unmatchable. This movie was Ravi's last outing.

The song Notanki featured in Ravi Teja's film Power. The film also starred Hansika Motwani and Regina Cassandra in pivotal roles. The actor busts some crazy moves while flirting with Hansika in this peppy track.

Do It Just Do It

Ravi Teja made an appearance in this groovy song from Bhadra. Do It Just Do It Song is a song all about the energy and can easily make you feel all enthusiastic. The film starred Ravi Teja alongside Meera Jasmine.

I Dont Want Luv belongs to the film Kick. Ravi Teja is seen trying to persuade an angry Ileana D'Cruz in this song. The actor looks dapper in this song and his goofy behaviour around the actress is quite charming.

Vega Vega features Ravi Teja in a very active avatar. The song has very quirky beats and seeing Teja groove soo smoothly to these quick beats will make you move as well. The song belongs to Ravi's film titled Nippu.

(The above story first appeared on LatestLY on Jan 26, 2021 09:20 AM IST. For more news and updates on politics, world, sports, entertainment and lifestyle, log on to our website latestly.com).