Sathyaraj Birthday Special: Did You Know The Baahubali Actor Played Rajinikanth's Father In A Movie Despite Being Four Years Younger Than Thalaiva?

Sathyaraj today has a pan-India fan following. He has always been a phenomenal actor but post Chennai Express and the Baahubali series, he has become the favourite of the entire nation, especially as Kattapa. But did you know in one movie he played Rajinikanth's father when he was four years younger than the superstar. 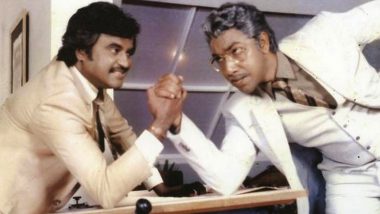 Cinema is a strange place and casting of films stranger. We have heard and seen several cases where real age-differences went for toss just to have a star as a hero. Anupam Kher had to do many such roles where he played father to heroes who were older than him. Sathyaraj, the magnanimous Kattappa from Baahubali, too had a similar incident to narrate. He played Rajinikanth's father in Mr Bharat despite being four years younger than him. Sathyaraj Birthday Special: These 5 Films of Baahubali Fame Prove He Is One of the Finest Actors of South Indian Cinema

Mr Bharath is a remake of Yash Chopra's movie Trishul which starred Amitabh Bachchan and Sanjeev Kapoor. Sathyaraj played Kapoor's role in the Tamil remake. The story is about a young man who wants to take revenge from his father who abandoned his mother after promising to marry her. Sathyaraj had no qualms playing Rajinikanth's father it seems. While speaking to Hindu about his role in Baahubali, he mentioned, "I am a great fan of MGR who is popular in folklore films, like NTR in Telugu movies. My dream of doing a folklore at 24 has been realised at 60 through Rajamouli. I played Rajinikant’s father when I was 31 and Rajini was 35, so I never cared for age..it never mattered to me.”

We also know Sathyaraj as Deepika Padukone's father in Chennai Express and thoroughly loved his performance in the film.

(The above story first appeared on LatestLY on Oct 03, 2021 08:10 AM IST. For more news and updates on politics, world, sports, entertainment and lifestyle, log on to our website latestly.com).