Suriya recently attended the wedding of Sudha Kongara’s daughter Uttra and his photos from the ceremony have taken the internet by storm. 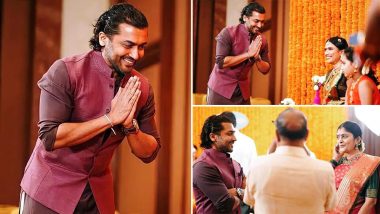 Suriya is gearing up for the release of Soorarai Pottru that is directed by Sudha Kongara. As fans eagerly await for the release of this Tamil film on Amazon Prime Video, here’s another sweet treat for them. Suriya recently attended the wedding of Sudha Kongara’s daughter Uttra and his photos from the ceremony have taken the internet by storm. Netizens are not only happy to catch a glimpse of him, but many are impressed with his new look. Soorarai Pottru Trailer: Suriya Starrer Is An Inspiring, Intense Tale And A Perfect Treat For Diwali 2020! (Watch Video).

Suriya was seen in a totally different avatar at the wedding function of Sudha Kongara’s daughter that reportedly took place in Chennai. He looked stylish in the traditional Indian wear, however, it was his roughly beard look and long locks that left fans impressed. Some of the comments posted by fans are like, ‘Enna Handsome ya’, ‘Charming Suriya’, ‘Handsome hunk’, ‘His current long-haired look is lit’, ‘Marvellous look’, ‘Omg he is wearing a hairband how cute’, ‘If this happens to be next look for @pandiraj_dir. After @ikamalhaasan, @Suriya_offl is one star who can pull off a variety of makeovers’, and so on.

Yes, besides praising him, some are even wondering if Suriya’s new hairdo is related to his upcoming project. Suriya has signed a film with Pandiraj that is tentatively titled as Suriya 40. He has also teamed up with Vetrimaaran for Vaadivaasal. The superstar has also signed up for an anthology web series titled Navarasa and it is produced by Mani Ratnam and Jayendhra.

(The above story first appeared on LatestLY on Nov 03, 2020 11:21 AM IST. For more news and updates on politics, world, sports, entertainment and lifestyle, log on to our website latestly.com).