Soorarai Pottru is based on the autobiography Simply Fly: A Deccan Odyssey that is written by Captain GR Gopinath. It stars Suriya in the lead role. 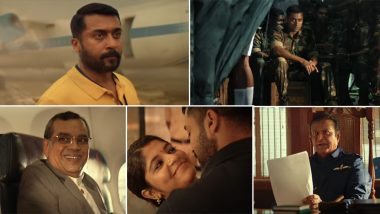 As promised, the makers of Suriya starrer Soorarai Pottru have released the much-awaited trailer. Not only that, they have also released the dubbed Telugu version of Soorarai Pottru that is titled as Aakaasam Nee Haddhu Ra. It stars Suriya as Nedumaaran Rajangam, a man with a mission, the one who made the impossible turned possible. It is a tale that is not only intense but even inspiring. Soorarai Pottru is indeed going to a perfect treat for Diwali 2020. The makers have revealed that this film is set to be premiered on Amazon Prime Video on November 12, 2020! Suriya Starrer Soorarai Pottru Trailer To Release On October 26! (Watch Video).

The trailer of Soorarai Pottru shows Suriya as a rebel, who is ambitious and has big dreams, a dream to fly high. It is the story of a simple villager who dared to dream the impossible to make every commoner in the country fly in airplane at low cost. He dreams of owing his own airline and he accomplishes it one fine day despite all the hurdles he faces from politicians and the corporate world. The trailer also gives a glimpse of Suriya’s chemistry with Aparna Balamurali, who is paired opposite him. She is seen as a strong pillar of support in his life as he heads towards the journey of flying high. Veteran Bollywood actor Paresh Rawan and Mohan Babu are also seen playing key roles in this upcoming Tamil film. Soorarai Pottru: Suriya Releases Statement Confirming Film's Delay Due To This Reason.

Watch The Trailer Of Soorarai Pottru Below:

Soorarai Pottru is based on the autobiography "Simply Fly: A Deccan Odyssey" that is written by Captain GR Gopinath. The upcoming flick is inspired by his life and his struggles of launching a low-cost airline service. Soorarai Pottru is produced under the banner of 2D Entertainment and co-produced by Sikhya Entertainment.

(The above story first appeared on LatestLY on Oct 26, 2020 11:01 AM IST. For more news and updates on politics, world, sports, entertainment and lifestyle, log on to our website latestly.com).