Teddy also stars Sathish and Sakshi Agarwal in supporting roles. Produced by KE Gnanavel Raja under the banner of Studio Green, the film will directly release on the OTT platform next month. 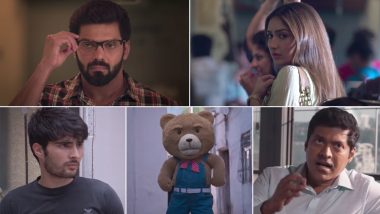 The much-awaited trailer of Arya's upcoming film Teddy is finally out. The trailer is packed with action and the audience is loving the superstar fight crime along with a talking teddy in the trailer. The film is directed by Shakti Soundar Rajan, who is often seen taking inspiration from Hollywood films for his movies, has probably done something similar for this movie as well. Teddy can be said to be on the lines of director Seth MacFarlane’s Ted movie franchise and we are sure the audience cannot wait to see what the team has to offer. Teddy Trailer: Arya Is All Set to Solve Medical Mysteries With a Talking Toy.

The trailer initially establishes that there is some sort of crime happening and bodies in a coma are being used in the wrong way. We get to see a glimpse of a couple of ambulances and a hospital and then enters our hero, who is fighting this system. Arya looks ravishing in the first few glimpses and offers the audience enough action-filled scenes to make them excited for the film.

Enters Teddy who is a witness to all these crimes. The bad people try to finish him and all the evidence that proves that the hospital is putting everyone in a coma purposely. Arya and Teddy try to fight them. We are then introduced to the beautiful Sayyeshaa, who helps them fight the baddies. In all, the trailer is quite intriguing and the audience will be compelled to think about what will happen in the story next. The trailer is quite gripping and the background music makes the trailer look even more thrilling. Teddy: Arya’s Upcoming Tamil Film to Stream From March 12, Trailer Out Tomorrow.

Teddy also stars Sathish and Sakshi Agarwal in supporting roles. Produced by KE Gnanavel Raja under the banner of Studio Green, the film will directly release on the OTT platform next month. Teddy will start streaming on Disney plus Hotstar from March 12.

(The above story first appeared on LatestLY on Feb 23, 2021 09:37 PM IST. For more news and updates on politics, world, sports, entertainment and lifestyle, log on to our website latestly.com).