Thalapathy 65: Pooja Hegde Roped In Opposite Vijay In The Action Drama (Watch Video)

Thalapathy 65 will be produced under the banner of Sun Pictures. It was earlier been confirmed that Manoj Paramahamsa, who has worked with Vijay in Nanban, has also been roped as the cinematographer for Thalapathy 65. 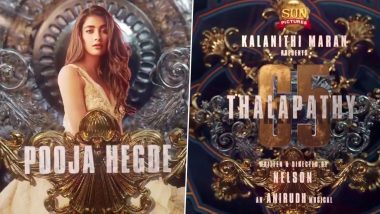 Thalapathy 65 starring Vijay is one of the most anticipated films currently. Directed by Nelson Dilipkumar, the film was announced back in February and people have been waiting with bated breath to know more details about the film. While seeing Vijay on the screen once again after Master was a great news for the fans, everyone was eager to know who the leading lady of the film will be. Rumours had it that Pooja Hegde will be joining the team as the female lead in the film but no confirmation about the same was given until today. Pooja Hegde Is a Perpetually Happy Soul in Manish Malhotra Ensemble!

Today, the makers finally confirmed that Pooja has been roped in for Thalapathy 65 and will be seen alongside Viaj in this action-drama. The film will mark Hegde's return to Tamil cinema almost after 9 years. The production banner of the film, Sun Pictures, posted a video welcoming the actress on board. In the video, we can see a gorgeous still of the actress surrounded by a decorative background. The music played in the video is lively and adds to the grandness of the announcement.

Thalapathy 65 will be produced under the banner of Sun Pictures. It was earlier been confirmed that Manoj Paramahamsa, who has worked with Vijay in Nanban, has also been roped as the cinematographer for Thalapathy 65. The popular duo, Anbariv, action choreographers and stunt coordinators, will be choreographing power-packed stunts for Thalapathy 65. Anbumani and Arivumani or Anbu and Arivu have choreographed action sequences for films such as Kabali, Singam 3, KGF: Chapter 1, Kaithi, among others. Pooja Hegde Has a Quirky Reply for an Instagram User Asking for Her Nude Picture.

Thalapathy 65 will be a pan-Indian movie. Anirudh Ravichander has been roped in as the film’s music composer. As for Pooja, the actress has quite a few interesting projects in her pipeline, including Radhe Shyam with Prabhas, Most Eligible Bachelor, Chiranjeevi and Ram Charan’s Acharya. She will also be seen in Cirkus, which stars Ranveer Singh, Jacqueline Fernandez and Varun Sharma.

(The above story first appeared on LatestLY on Mar 24, 2021 07:57 PM IST. For more news and updates on politics, world, sports, entertainment and lifestyle, log on to our website latestly.com).