Sethupathi is an actor, producer, lyricist, and a dialogue writer which means he his hand full with different projects. He works predominantly in Tamil films but has tried his hand in Telugu, Malayalam, and Hindi productions as well. 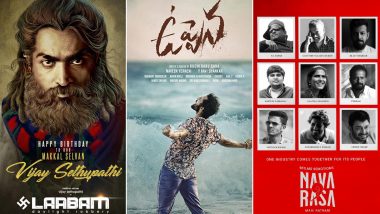 Vijay Sethupathi is currently basking in the glory of the success that his recently released film Master is receiving. He essayed the role of the antagonist in the film and has won several hearts with his stellar acting. The film was an iconic move also as it became one of the few films to have released in theatres after the lockdown caused by the pandemic. But with Master finally out for the audience to enjoy, the actor can now focus on his other projects. Vijay Sethupathi To Make His Digital Debut With Shahid Kapoor For Raj & DK’s Web Series?

Sethupathi is an actor, producer, lyricist, and a dialogue writer which means he his hand full with different projects. He works predominantly in Tamil films but has tried his hand in Telugu, Malayalam, and Hindi productions as well. His upcoming projects range from action films to romantic one and the actor will also be venturing into the OTT space this year. And since today the actor is celebrating his 43rd birthday, we thought we will quickly give you a sneak peek of his upcoming films and shows.

Starring Vijay Sethupathi in the lead and Parthiban as the antagonist, Tughlaq Durbar will be a political drama. It is currently in its post-production phase. Directed by Delhiprasad Deenadayalan, this upcoming flick is touted to be a commercial entertainer. Produced by Lalit Kumar under Seven Screen Studio banner, Tughlaq Durbar’s music has been composed by Govind Vasantha. Tughlaq Durbar Teaser: Makkal Selvan Vijay Sethupathi And Parthiban’s Role In This Political Drama Looks Promising!

Vijay Sethupathi will be seen in a cameo role in comedy-drama Kadaisi Vivasay. The film is written and directed by M. Manikandan and stars eighty-five-year-old farmer named Nallandi in the lead roles and Yogi Babu in a pivotal role. Other members of the main cast are yet to be announced. The film is currently in the post-production phase.

Vijay Sethupathi's role in Uppena will be a major one. He character Rayanam will be seen alongside Panja Vaisshnav Tej and Krithi Shetty essaying pivotal role in the film. Uppena marks the debut of filmmaker Buchi Babu Sana who is currently filming the film with the cast. This film will be released in Telugu.

Maamanithan is a Tamil drama which is directed and written by Seenu Ramasamy. Yuvan Shankar Raja will be backing this film under his YSR Productions. Maamanithan will mark Vijay Sethupathi's fourth collaboration with Yuvan Shankar Raja and Seenu Ramasamy after Thenmerku Paruvakaatru, Idam Porul Yaeval and Dharma Durai. The film is currently being filmed. Thalapathy 64 Update: Here’s When Vijay Sethupathi Will Start Shooting for Lokesh Kanagaraj Directorial.

Yaadhum Oore Yaavarum Kelir will see Vijay with Makkal Selvan in the lead role. This is director Venkata Krishna Rohanth 33rd film. The film will be produced by Isaki Durai and the music of the film will be composed by Nivas K Prasanna. The film is currently in its production phase.

Kaathuvaakula Rendu Kaadhal features Nayanthara, Vijay Sethupathi and Samantha Akkineni in the lead roles. It is an upcoming rom-com that is written and directed by Vignesh Shivan. The film will show a love triangle between the three actors produced under the banners of Seven Screen Studio and Rowdy Pictures. The film is currently in its production phase.

Vijay Sethupathi and Nithya Menen will be teaming up for the Malayalam film titled 19(1)(a).  The film is written directed by Indhu VS, making her directorial debut. Touted to be a realistic drama, the film also features Indrajith Sukumaran and Indrans in pivotal roles.

Idam Porul Yaeval is a drama film directed by Seenu Ramasamy and backed by N. Lingusamy. It stars Vijay Sethupathi and Vishnu Vishal alongside Aishwarya Rajesh and Nandita Swetha in lead roles. The shooting of the film was wrapped up a couple of years ago and the film has been stuck due to various reasons.

Vijay also has an untitled Deepak Sundarajan project in his kitty. It is being reported that he will also be a part of Corona Kumar which is a comedy spin-off of Idharkuthane Aasaipattai Balakumara. He is said to have a special appearance in the film. The superstar will also voice a character in Andava Kaanom Anda. In short, Vijay has a few busy months ahead and we are sure his fans cannot wait to see him on the screen. Join us in wishing the actor a very happy birthday.

(The above story first appeared on LatestLY on Jan 16, 2021 12:00 AM IST. For more news and updates on politics, world, sports, entertainment and lifestyle, log on to our website latestly.com).