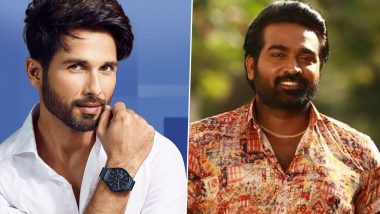 Vijay Sethupathi and Shahid Kapoor are the finest actors in Tamil and Hindi Cinemas, respectively. It was two months ago when reports started doing rounds that Shahid Kapoor would be making his digital debut with Raj & DK’s new web-series. The latest buzz is south actor Vijay Sethupathi would also be making his digital debut with Raj & DK’s web series. Touted to be an action-thriller, a source revealed to an entertainment portal that Sethupathi is being considered to essay a key role in this series. Shahid Kapoor to Mark his Web Debut With Raj & DK's Next for a Leading OTT Giant?

About Vijay Sethupathi’s digital debut, the source revealed to Bollywood Hungama, “Vijay Sethupathi has been roped in for a pivotal role in the series. Raj and DK wanted someone of his stature to join the cast of the action thriller. The team plans to kickstart the shoot of the same from January in Mumbai and Goa. The action thriller will be an episodic series and have both Shahid and Vijay in a never seen before role. The untitled show will also mark Vijay’s debut in a series on the OTT platform.” However, there has been no official announcement made on this yet. Did Aamir Khan Replace Vijay Sethupathi In Laal Singh Chaddha Due To A Few 'Extra Kilos'?

The source also revealed that both Shahid Kapoor and Vijay Sethupathi have charged a whooping amount for the web series. Meanwhile, Shahid will next be seen in Jersey, remake of the Telugu film of the same name. On the other hand, Vijay will next be seen in Tughlaq Durbar, Kaathu Vaakula Rendu Kaadhal and 19(1)(a). The actor was also going to make his Bollywood debut with Aamir Khan’s Laal Singh Chaddha, however, it couldn’t work out owing to date issues.

(The above story first appeared on LatestLY on Dec 20, 2020 02:03 PM IST. For more news and updates on politics, world, sports, entertainment and lifestyle, log on to our website latestly.com).