The poster shows a glimpse of the lead actors encapsulated in the letters of the word 'Mumbaikar'. We also see a few birds on the poster and a few glimpses of Mumbai. 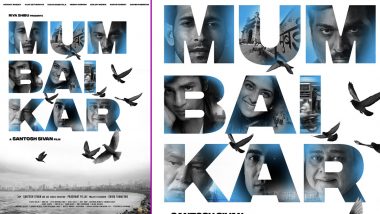 The new year started with a lot of fresh announcements about new films and projects. Karan Johar also surprised the audience by unveiling the poster of his next film. Titled Mumbaikar, the film is an action thriller based in the heart of Mumbai. The film stars Vijay Sethupathi and Vikrant Massey amongst other stars who have features on this first look poster of the film. Karan was quite excited about the release of the poster and revealed that the film will be foraying into the realities of Mumbai just like the past films like Slumdog Millionaire and Gullyboy. Karan Johar Upset With Film Fraternity For Not Standing By Him Decides to Quit MAMI Board?

The poster shows a glimpse of the lead actors encapsulated in the letters of the word 'Mumbaikar'. We also see a few birds on the poster and a few glimpses of Mumbai in the first look poster of the film. Filmmaker Santosh Sivan will be directing this film while SS Rajamouli will be co-producing the film.  Talking about the film, Sivan said, "Mumbai may be a metro, but Mumbaikar is an emotion! Hence the title. In terms of cast, we have an intriguing and interesting mix of national talents. And that adds to the magic."

Talking about the film, Karan Johar said, “I am very very pleased and honoured to share with you, two gentlemen whose work I have admired and applauded in Cinema. One is Santosh Sivan, the prolific cinematographer and director whose work is tremendous, and the world has acknowledged it and continues to. The other is the brilliant artiste, the genius artiste Vijay Sethupathi Sir." Karan Johar Jokes About Kriti Sanon and Sushant Singh Rajput Having Any Chemistry in Raabta.

He added, "His work has been again world-acclaimed, applauded and for everyone to see how it has been. These two formidable gentlemen are coming together to make a film, and I have the grand pleasure of actually sharing the first look. It has a formidable ensemble and I cannot wait for you to actually have a look. There is much more coming up."

(The above story first appeared on LatestLY on Jan 01, 2021 09:00 PM IST. For more news and updates on politics, world, sports, entertainment and lifestyle, log on to our website latestly.com).