Starring Vijay Sethupathi in the lead and Parthiban as the antagonist, this teaser of Tughlaq Durbar gives a glimpse of the upcoming political drama. 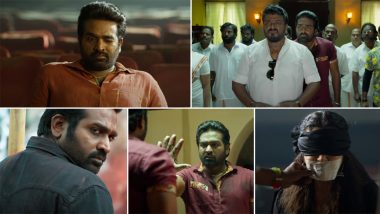 The makers of Tughlaq Durbar had announced that the film’s teaser would be launched on January 11 on Sun TV’s YouTube channel, and as promised, the teaser is out! Starring Vijay Sethupathi in the lead and Parthiban as the antagonist, this teaser gives a glimpse of the upcoming political drama. Netizens had gone bonkers when the stills of the film and the poster had released. And now with the release of this teaser, one just can’t keep calm. Vijay Sethupathi Starrer Tughlaq Durbar To Feature Raashi Khanna As The Female Lead!

When the makers had released the poster of Tughlaq Durbar, movie buffs got to see two shades of Makkal Selvan with a golden coin placed in the centre. The teaser gives a glimpse of how the lead actor gets into the world of politics. Vijay Sethupathi is initially shown working for Parthiban in politics, but later turns against him. You’ll also see blink-and-miss appearances of two actresses, who get kidnapped, and they are Raashi Khanna and Manjima Mohan. Tughlaq Durbar First Look: Vijay Sethupathi Will Colour You Intrigued With the Poster of His Political Thriller.

Watch The Teaser Of Tughlaq Durbar Below:

Directed by Delhiprasad Deenadayalan, this upcoming flick is touted to be a commercial entertainer. Produced by Lalit Kumar under Seven Screen Studio banner, Tughlaq Durbar’s music has been composed by Govind Vasantha. Besides this film, Vijay Sethupathi has another biggie lined-up for a theatrical release and that is Master in which he’d be seen as the antagonist.

(The above story first appeared on LatestLY on Jan 11, 2021 12:59 PM IST. For more news and updates on politics, world, sports, entertainment and lifestyle, log on to our website latestly.com).