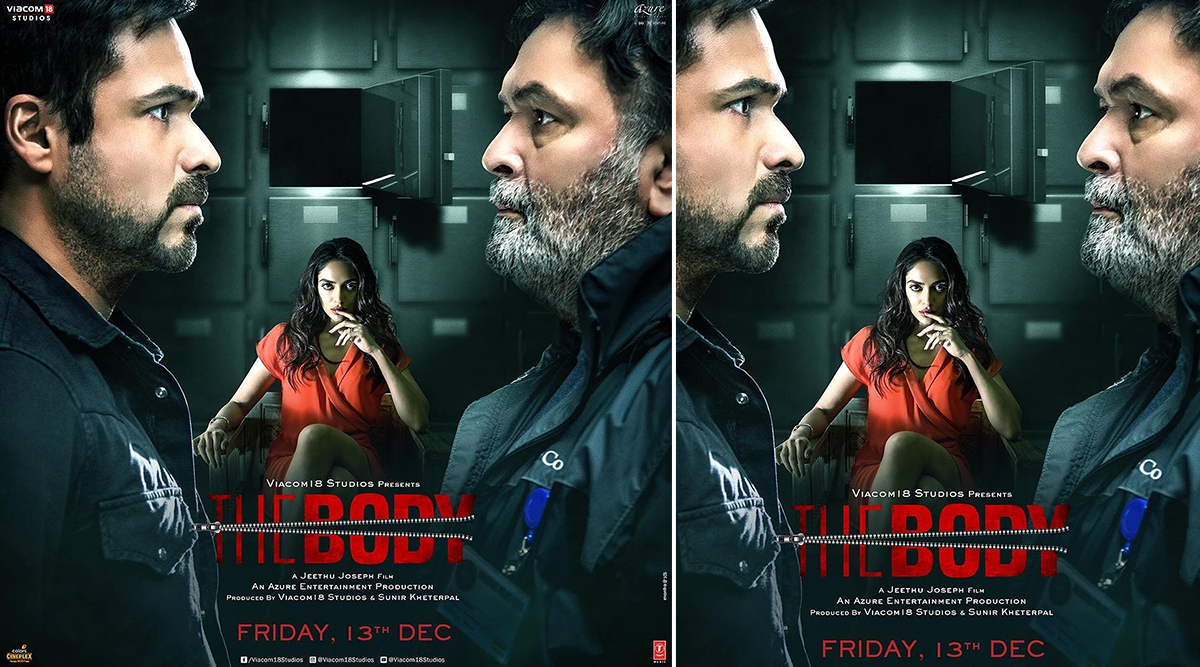 Emraan Hashmi, Rishi Kapoor's suspense thriller The Body is all set to hit theatres in India on December 13. The film marks the Bollywood debut of Malayalam filmmaker Jeethu Joseph who has also directed Mohanlal starrer acclaimed hit Drishyam. The Body official trailer has left everyone intrigued and looks like suspense thriller fans would not want to miss this. The film is clashing with Rani Mukerji's crime thriller Mardaani 2. It is also clashing with Dwayne Johnson, Kevin Hart, Nick Jonas starrer Hollywood movie Jumanji: The Next Level on the same day. The Body marks Emraan Hashmi's return on the silver screen after Why Cheat India that flopped at the BO. On the other hand, Rishi Kapoor will be back on the big screen post his cancer treatment in New York. The 102 Not Out star was last seen in Sunny Singh, Jimmy Shergill 2019 movie Jhootha Kahin Ka which flopped as well. Both Rishi Kapoor and Emraan Hashmi would be looking to register a box-office hit with The Body. The Body: From Memories to Drishyam, 5 Memorable Thrillers That Jeethu Joseph Has Given to Malayalam Cinema.

The suspense thriller would have stiff competition from Rani Mukerji's Mardaani 2 at the ticket window, also past week release Pati Patni Aur Woh would also affect the Emraan Hashmi film. It would be interesting to see the Box-office performance of The Body in its opening weekend. Just Before you plan to watch Emraan Hashmi, Rishi Kapoor's murder mystery in the theatre near you, Here is everything you need to know about The Body. The Body Trailer: Emraan Hashmi and Rishi Kapoor’s Thriller Looks Edgy and Intriguing (Watch Video)

The Body is adapted from the 2012 Spanish film El Cuerpo which is also titled The Body in English. It is a murder mystery thriller following the same premise of the original film where a detective searches for the body of a femme fatale which has gone missing from a morgue.

Here's the trailer of The Body

The Music of The Body is composed by Shamir Tandon, Arko and Tanishk Bagchi with lyrics written by Arko, Kumaar, Manoj Muntashir and Sameer Anjaan. The film also has a remix version of Emraan Hashmi's 2004 film Axar's hit song "Jhalak Dikhlaja"

Here are the two songs from The Body

The Body is made on an estimated budget of Rs 20 crores including print and advertising cost. Which means that the Rishi Kapoor, Emraan Hashmi film has to cross the Rs 50 crores club to be a box-office hit.

The Body is expected to cater to a very niche audience and hence it would struggle at the box-office to register cash. LatestLY predicts The Body's opening day gross to be around Rs 3 - 4 crores. It would struggle to cross the Rs 10 crores mark in its opening weekend.

Pouring the final reviews of The Body LatestLY's Rajat Tripathi wrote 'The Body has a story that will keep you hooked from start to end. It is carefully crafted to make the audience think it is predictable only to turn everything on its head in the second half. But movie buffs who have watched enough of cinema will find the execution boring and unoriginal.' Here is the full movie review of Emraan Hashmi and Rishi Kapoor Film.