All of Us Are Dead Review: Netflix’s Korean Zombie Series is Over-Long But Serves a Bloody Good Time! (LatestLY Exclusive)

All of Us Are Dead is a horror survival show that sees a bunch of students trapped in a Zombie infested school. The K-Drama is streaming on Netflix right now. 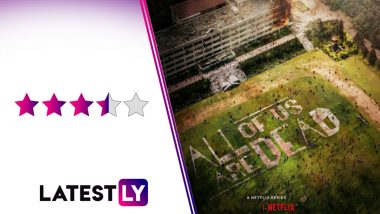 All of Us Are Dead TV Series Review (Photo Credit: LatestLY)

All of Us Are Dead TV Series Review: Zombie stories for a good while have started to feel repetitive in nature. Perhaps it’s the feel of not having anything new to offer, or the fact that genre has just gotten uninteresting. But sometimes in a blue moon you will find a show that takes the concept and delivers something great and unique. All of Us Are Dead may not exactly fit that description, but it still provides a bunch of thrills and interesting ideas that makes this K-Drama worth watching. Scream 5 Movie Review: Neve Campbell and Courteney Cox’s Fourth Sequel is a Stab-Happy Return to Form With Some Flaws! (LatestLY Exclusive).

All of Us Are Dead is based on the webtoon Now at Our School. The show sees a school become ground zero for a zombie outbreak. We follow a bunch of trapped students who have to make their way out of the school, or turn into one of the infected. Quite a simple premise for a zombie show that works wonders. It has this sense of claustrophobia that you might have felt from watching Train to Busan, and that works incredibly well here.

Scenes feel tense and tight as you see the rabid monsters curl up and run for people. I don’t remember the last time I was this frightened while watching a live action piece of Zombie media. This is also in thanks to the way the zombies themselves behave. Their bodies coil up and contort that really leans heavily into the body horror aspects of them. Mixed in with some bone cracking sound design, you have a recipe for some really frightening scenes here.

Even the character work here lends itself for you to feel for them, even though at times they might make some frustrating decisions. With the majority of the show taking place in a school, you are bound to have some school drama. This could have been a real disaster, but the way All of Us Are Dead navigates around the plotlines are great. Each and every actor of the ensemble does great over here, with special mention towards Park Ji-Hoo, who plays the role of Nam On-Jo.

The real fun of watching zombie stories is also watching the fall of civilization, and All of Us Are Dead is exactly that. When watching Zombie media, you get to see maybe 10 minutes of society falling and it cuts to a few years later or weeks. In All of Us Are Dead the action starts and ends when society starts falling. Also to keep things more fresh, All of Us Are Dead introduces some new concepts to the zombie genre that I won’t spoil, but going into the show it had left me quite excited.

The soundtrack and cinematography on a technical level are quite amazing too. While All of Us Are Dead does get up close and personal, to show the scale of chaos they occasionally pull back the camera. That in itself shows the scale of threat and something that I have wanted from these huge scale horror properties now for a while. Even watching a person turn into a zombie doesn’t get old, because of how good the camera work is.

Now while the show does check off the list of being a great time, there are still things that are stopping it from being great. In All of Us Are Dead, whenever we are in the school, the show is top notch, but whenever the story goes out of the school, it starts tumbling. Maybe it’s the story starting to feel bloated, or the sense of adding more drama, but most of that part just ends up feeling like floof.

It has to do with the fact that once you’re in the city, you can’t distinguish it from any other zombie story. When you stay in the school, or when the events are condensed in one place, there is this certain sense of fright. I just didn’t feel that way while seeing the story that took place outside the school. The Characters also at times are prone to making a lot of dumb decisions that will leave you frustrated. These instances come off being plot convenient rather than them feeling natural. The Ice Age - Adventures of Buck Wild Movie Review: Simon Pegg’s Spinoff Saga is Partly Enjoyable, But Mostly Annoying! (LatestLY Exclusive).

All of Us Are Dead also runs for around 12 episodes with each lasting from 50 minutes to an hour. There isn’t enough story here to justify the length of it and that eventually does make All of Us Are Dead a bit tedious to watch. The sense of thrill because of this starts to die down by the end of the show, and it does end up overstaying its welcome.

(The above story first appeared on LatestLY on Jan 30, 2022 05:26 PM IST. For more news and updates on politics, world, sports, entertainment and lifestyle, log on to our website latestly.com).