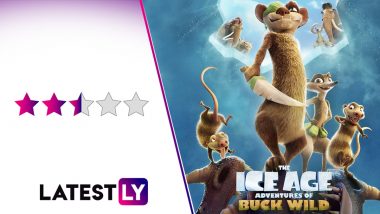 The Ice Age Adventures of Buck Wild Movie Review: Ice Age long has been embedded in the zeitgeist of early '2000s animated films. Spawning five theatrical films, Ice Age was one of the most recognisable IP’s in animation. But sadly, while the series kept improving from a technical point of view, from a storytelling one it failed to reach the heights of the first, partly because the series didn’t have much to offer. With The Ice Age Adventures of Buck Wild, what we get is an extension of the third film which is quite fun, but still having something holding it back. Scream 5 Movie Review: Neve Campbell and Courteney Cox’s Fourth Sequel is a Stab-Happy Return to Form With Some Flaws! (LatestLY Exclusive).

The Ice Age Adventures of Buck Wild is a spinoff focused on Buck Wild. The weasel voiced by Simon Pegg is joined by the brothers Crash and Eddie who want to find a place of their own. They find themselves in the same dinosaur world where they had been a few years back, and meet Buck Wild. Together they will fight the unruly dinosaurs who inhabit the lost world.

I always found Ice Age: Dawn of the Dinosaurs to be more enjoyable than the entries that came later on. There was something about that movie having a special charm that spoke to me, or merely the fact that it had dinosaurs in it. So I was glad to see that setting being embraced here again. That world is beautiful and the story being continued here felt fun to watch. It felt like an extension of the third film, and that being explored over here was definitely great to watch.

The story also lends itself to some silliness, although it has a few standout moments. For one, the story with Buck is the strongest aspect of the film. Even in Dawn of the Dinosaurs and the other movies he appeared in, he was a great standout. So with his character getting more depth and relations here, it was fun to watch. Buck also gets new companions here that I won’t reveal because they aren’t mentioned in the trailers at all; they bring a nice sense of characterisation to him.

Although the characters directly related to Buck are okay, it’s Crash and Eddie that brought down the film for me. I have always found them annoying, but they never really stuck out because of limited screen time. Over here, they are prominently featured and it took me out of the story immediately. These characters are supposed to be comedic reliefs, so once you just give them a prominent role, they aren’t going to have the same impact on the audiences.

Even the villain of the movie can come off as a bit annoying, but seeing as to how this is aimed towards children, I can understand why he is like that. The one redeeming thing though I can say about the characters is that all of them have an arc, and that’s most of it is because they play off of Buck. If the film hadn’t been centered around Buck, it wouldn’t have worked at all.

For veteran Ice Age fans, you get a good dose of the old classic characters like Manny and Sid as well, although some might be disappointed that they aren’t voiced by their original actors.

If there is one more thing to mention, it’s that the animation is a far cry from what you would expect. It truly is lacking. Originally, The Ice Age Adventures of Buck Wild was conceived as a television show, only late into development did they think on changing it into a film. You can see the television quality of animation seep through. Everything seems way too smooth with environments lacking detail. Come on guys, you have Disney money behind you now, you could have done better. The Royal Treatment Movie Review: Mena Massoud and Laura Marano’s Netflix Romcom is a Clichéd Tale With No Stakes in It! (LatestLY Exclusive).

(The above story first appeared on LatestLY on Jan 28, 2022 04:06 PM IST. For more news and updates on politics, world, sports, entertainment and lifestyle, log on to our website latestly.com).