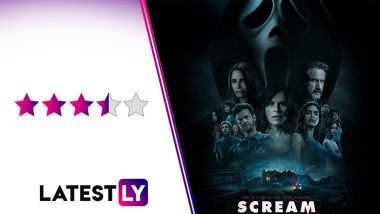 Scream 5 Movie Review: Hollywood has been rebooting some of its most classic franchises left and right for the past few years. The thing with these reboots are that you are never exactly sure as to what you might get. You may end up with Halloween (2018) or you may end up with Child’s Play (2019). So where exactly does Scream 5 land? Well right in the middle. The Royal Treatment Movie Review: Mena Massoud and Laura Marano’s Netflix Romcom is a Clichéd Tale With No Stakes in It! (LatestLY Exclusive).

Quite simply titled Scream for its domestic release, and Scream 5 for its international release, the film is directed by the duo of Matt Bettinelli-Olpin and Tyler Gillet. The movie follows a new bunch of characters being hunted by Ghostface after a town secret comes out. With this being the first film in the Scream franchise not being directed by Wes Craven, Scream 5 does a great job at being true to the feeling of Scream legacy. Randy Meeks would be proud, God bless his nerdy soul!

With how the direction of Scream 5 is, it maintains all the classic callbacks and feel of the earlier films while still trying to carve out an identity of its own. The directors do a great job here at making the tone familiar while still distinct in some places. Sure it doesn’t break any new grounds, and that’s completely alright. Also to note, there are some gorgeous shots present throughout this movie that was quite surprising to see honestly. Not just the cinematography, but the way some scenes would follow the characters and how some shots were framed. Overall, the direction here was good considering the new talent being added here.

Talking about new talent, we get a new cast, and they do a great job at not being annoying and actually do a great job at coming into their own. Melissa Barrera’s Samantha leads our new set of characters, and she actually has quite the development through the plot. Having a huge revelation attached to her that I won’t spoil, she feels like a natural character important to the plot rather than just someone added for the sake of it. I loved seeing her journey through the film. Jack Quaid also delivers a good performance with shades of Hughie from The Boys seeping in here.

The majority of the cast also does a lot of great work. Scream movies are essentially Horror Whodunnit, and that vibe is maintained throughout the film. With how the twist and turns are handled, some you truly won’t see coming while some do become predictable. But while they are predictable, the reasoning behind those are so meta that I found myself just rolling along with it and enjoying it. It was like watching pretentious Redditors from r/movies on Reddit being made fun of, and I was just smiling in my seat.

The film is so meta of the internet culture in general, that it made me nostalgic about participating in film discussion on online boards. Just the references of “elevated horror” and other callbacks made it feel like the film was constantly making fun of the pretentious discussions online, and it ate every second of it up.

The story itself is quite enjoyable too. I loved how it tried not being a rehash of the original, while still maintaining some aspects of it. It made for a great blend of old and new that didn’t feel forced in, but rather honoured what came before it.

Also with a new cast, you have a few legacy characters returning. Neve Campbell (Sidney Prescott), David Arquette (Dewey Riley) and Courteney Cox (Gale Weathers) reprise their roles, but there was something that felt off about it. While I loved some of the character interactions they had, Scream 5 just didn’t do enough with them out of the third act. David Arquette shines here as Dewey. With him suffering some PTSD and being sad about his personal life, there was so much more that could be explored, but the movie ultimately drops the ball.

Courtney Cox also doesn’t have much to do here. She is there just to react to Dewey and that’s just not much. I can understand that you need the new characters to shine as well, but don’t waste the legacy characters that you have. But, Neve Campbell impresses in the third act. She gets to do the most over here, and she sells the hardened, tough and experienced veteran quite well. She has one of the best moments in the movie, and you will realise what that is when you watch it. I just wish there was more of them.

While I also did love the meta commentary, at times it just happened way too many times. For example, The Matrix Resurrections was a mess, but it knew a fine line between making the meta commentary minimum but effective. Over here sometimes it can get too much, and overwhelming and at times, can lose its meaning. That’s just me, some people might love the excess meta references, but that wasn’t the case. I still think the original Scream balanced it quite better than how it was done here.

Also a bit of nitpick, don’t know if it was just for my screening, but there was quite an awkward edit at the beginning. It was jarring because it took place in the same frame and it was quite noticeable with the character changing their stance in a split second. Again, not sure if everyone else experienced it, but if present, then that was quite the weird choice to leave it in. Hotel Transylvania Transformania Movie Review: Andy Samberg and Selena Gomez’s Animated Film is a Loud, Uninspired Showing With Some Decent Animation (LatestLY Exclusive).

Meta Commentary Can Get Overwhelming

Not Enough Done With Legacy Characters

Scream 5 is a stabbing return to form as it blends the new with the old and provides a perfectly enjoyable popcorn experience. While it doesn’t break any new grounds, it’s one horror film that you won’t regret watching in theatres. In a time of reboots of classic franchises, Scream 5 is one movie that will definitely leave you satisfied as a fan.

(The above story first appeared on LatestLY on Jan 26, 2022 04:34 AM IST. For more news and updates on politics, world, sports, entertainment and lifestyle, log on to our website latestly.com).