Arshi Khan Birthday Special: Lesser-Known Facts About the TV Star We Bet You Aren’t Aware Of!

As the television actress Arshi Khan celebrates her birthday today (November 29), we take a look at some of her rare facts which will amaze you for sure. Read on. 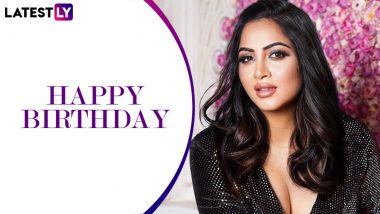 Arshi Khan is quite a known face from the TV space. However, she became famous after appearing on India’s controversial reality show, Bigg Boss 11, hosted by Salman Khan. Her tiff with Hina Khan was the highlight of the season and since then there was no looking back. Her badass and vocal attitude was appreciated by fans. Not just this, Arshi’s nighties which she wore on BB 11 also garnered attention. She has been part of many controversies, but as it’s her 29th birthday today (November 29), we take a look at some of the unknown facts about the TV star that we are sure you are unaware of. Bigg Boss 14 Fame Arshi Khan Hospitalised After She Met With a Car Accident in Delhi – Reports.

First things first, Arshi is an Afghan origin as her parents had migrated to India when she was merely four years old. In India, she’s from Bhopal and later shifted to Mumbai for her career. Also, did you know that besides TV, the actress has also done South Indian films? Yes, she has starred in India’s first 4D film titled The Lady Emperor wherein she played the role of Aurangzeb’s wife. Woah interesting! Arshi Khan to Charge Rs 7 Crore For Her Swayamvar Show 'Ayenge Tere Sajna'.

Having said that, Arshi indeed has worked hard to taste fame and started as a model in the industry. In 2014, she was crowned Miss Glory Earth in a pageant. She has also acquired a spot in the top 10 list of the Miss Bikini Online Contest in the same year. On the professional front, she was last seen as a challenger on Bigg Boss 14 and is rumoured to have a swayamvar show soon. Happy Birthday, Arshi Khan!

(The above story first appeared on LatestLY on Nov 29, 2021 08:20 AM IST. For more news and updates on politics, world, sports, entertainment and lifestyle, log on to our website latestly.com).