Arshi Khan of BB 14 has met with an accident on November 22. She was rushed to a hospital after the incident. As per reports, she has suffered minor injuries and out of danger now. Read on! 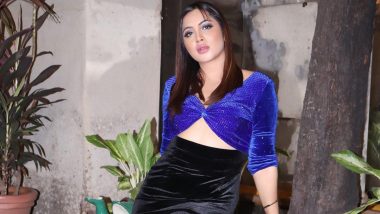 Bigg Boss 14 fame Arshi Khan has reportedly met with a major car accident on Monday (November 22). She has underwent minor injuries and has been admitted to a hospital. The accident took place in Malviya Nagar, Delhi. Arshi is well known for appearing in shows like Vish, Ishq Mein Marjawan, The Evil Desires, Raat Ki Rani Begum Jaan and Savitri Devi College & Hospital. Arshi Khan: I Am Glad People Discuss About Me on ‘Bigg Boss OTT’.

As per ETimes a source was quoted as saying, "Arshi was in a car. The accident happened near Malviya Nagar, Shivalik road in Delhi. The complete narration is yet not revealed. The actress was hospitalised." Later on, Arshi's family has also confirmed the news of her accident.  Arshi Khan on Bigg Boss: It Is Funny to See How Down People Get Just to Enter the Reality Show.

Also, according to India Today, "The actress was accompanied by her assistant, Rekha, in the car. As soon her car dashed, the airbag opened, which saved her from major injuries. Though she is fine now and recovering after medical consultation, she is having pain in the chest." Arshi was last seen in BB 14 as a wild card entry contestant. Earlier, she has featured in BB 11, where she had a flirty conection with Hiten Tejwani. She is hospitalised now and hope so Arshi gets well soon!

(The above story first appeared on LatestLY on Nov 22, 2021 05:29 PM IST. For more news and updates on politics, world, sports, entertainment and lifestyle, log on to our website latestly.com).