Bigg Boss 13 fame Hindustani Bhau's Instagram account has been now taken down for going against the community guidelines. Read on. 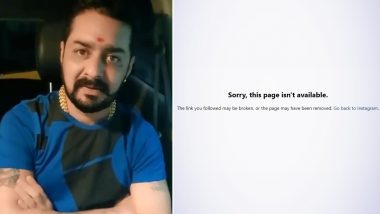 Bigg Boss 13 contestant Hindustani Bhau has been making a lot of buzz these days for all the wrong reasons. Earlier, he was in the news for targeting Ekta Kapoor and recently the so-called YouTuber made headlines for his video filled with derogatory language. His clip was abusive, promoted violence and also spread hate. Many celebs and netizens tagged Mumbai Police and the cyber cell to take action against him. And looks like finally, the authorities have taken the complaint seriously as Bhau's Instagram account has been now taken down for going against the community guidelines. Kubbra Sait Calls Out Hindustani Bhau's Viral Video Promoting Communal Violence (Read Tweet).

Yep, you read that right. So, now when you simply google Hindustani Bhau Instagram and click on the link, you land on a page that reads 'Sorry, this page isn't available'. For the unversed, Bhau is known to be quite an outspoken man and a staunch supporter of Hinduism. Also, as soon as this news of Bhau's Instagram account has been taken down was out, netizens rejoiced. Hindustani Bhau Deletes TikTok Account in Support of Carry Minati After 'YouTube Vs TikTok: The End' Roast Video Taken Down, Fans React With Funny Memes.

And Here's One Of The Recent Controversial Videos Of Hindustani Bhau:

Calling for open violence is a crime. This is a mob building & hate spreading excercise. This is deeply alarming. Could lead to violence & an artist not getting due process.

are an insult to our constitution... pic.twitter.com/oeCfdGFRu5

(The above story first appeared on LatestLY on Aug 20, 2020 05:04 PM IST. For more news and updates on politics, world, sports, entertainment and lifestyle, log on to our website latestly.com).