An audio of Bigg Boss 14 contestants Aly Goni and Jasmin Bhasin has gone viral on the web wherein the two can be heard talking about the show's bad ratings, their contract and also adds that BB 14 might get an extension. Check it out. 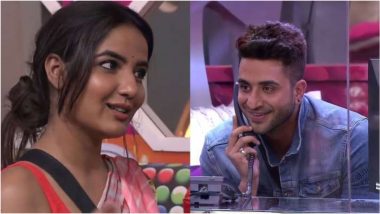 This year sadly, the controversial reality show Bigg Boss is not making the right kind of noise. The show which always tops the TRPs chart, this time is a sure cut flop. Well, not just fans, even two contestants on the show namely Aly Goni and Jasmin Bhasin are upset with the bad ratings of Bigg Boss 14. An unverified audio clip has leaked online wherein Jasmin and Aly can be seen discussing the TRPs of BB, a few details from their contract and how the reality show might also get extended. The sound of the audio is crystal clear and also resembles Aly-Jasmin's voice. Bigg Boss 14 November 26 Episode: Rubina Dilaik and Jasmin Bhasin’s Friendship Finally Comes to an End – 5 Highlights of BB 14.

The conversation between the two starts with talking about the extension of the show. To which Jasmin can be heard saying, "Mujhe lagta hai ki do hafta extend hoga." Ahead she also asks wild card entrant Aly that are the TRPs so bad this time and we hear Aly giving it a nod. "Abhi nahi pata kaisi hai but its around 1.2, like opening was good 2.7," he replies. Ahead the conversation moves to Aly-Jasmin discussing their contract and we feel WTF.  Bigg Boss 14: Netizens Slam Jasmin Bhasin, Call Her a Hypocrite for Saying Rubina Dilaik Has Superiority Complex (View Tweets).

Check Out The Audio Below:

Well well, the contractual discussion between the two also makes us wonder that if Aly and Jasmin are already pre-decided to be in the top five? However, real the audio may sound, we clearly do not know how authentic it is. Stay tuned!

(The above story first appeared on LatestLY on Nov 27, 2020 02:12 PM IST. For more news and updates on politics, world, sports, entertainment and lifestyle, log on to our website latestly.com).