Sunday’s Bigg Boss 14 Weekend Ka Vaar episode with Salman Khan saw close pals Rubina Dilaik and Jasmin Bhasin’s equation going for a toss. All this happened when Jasmin said that Rubina has a superiority complex. Here, check out Twitter reactions to the same. 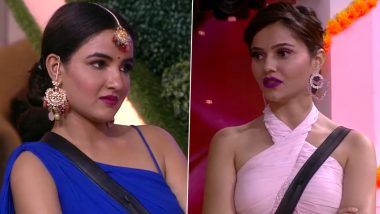 Sunday’s Bigg Boss 14 Weekend Ka Vaar episode with Salman Khan saw close pals Rubina Dilaik and Jasmin Bhasin’s equation going for a toss. It so happened that Salman Khan introduced a task where the contestants had to feed a gulab jamun to another inmate and tell what’s his/her misconception. During this, Jasmin tagged Rubina as a fellow housemate with a superiority complex. This irked Dilaik and she also bashed Jasmin for using this platform for uttering something as such about her personality. As soon as this incident took place, netizens on social media supported Rubina over Jasmin and slammed the latter for her insensitive remark. Bigg Boss 14 Weekend Ka Vaar November 15 Episode: Jasmin Bhasin Feels Rubina Dilaik Has Superiority Complex; Shardul Pandit Evicted – 5 Highlights of BB 14.

Twitterati started to take dig at Jasmin and called her a hypocrite, not a true friend, jealous and what not. Seems like Rubina's strong fan base was in no mood to take it and so they gave a reality check to the Dil Se Dil Tak actress. FYI, it was even shocking for us to see Jasmin saying something like this about her staunch supporter Rubina in front of Salman Khan. Check out a few Twitter reactions to this. Bigg Boss 14 Preview: Kavita Kaushik Yells and Cries; Captain Aly Goni Gets the Power to Nominate (Watch Video).

I am totally with #RubinaDilaik .. if my friend would call me out like this publicly it would hurt me deeply. Rubina literally got humiliated for #JasminBhasin in wkv & didn’t throw her under the bus.

Rubinav need to be wary of her 😑#BB14 #BiggBoss14 #AbhinavShukla

Fake #JasminBhasin has sensed it that being on #RubinaDilaik side will cost her humiliation so she has gone to a safe side. I love how #RubinaDilaik stand alone like a tigress 🦁 Fans of all contestants voted for #Shardul to vote out rubina but she still won.

Its #Rubina vs All💪

Plus, she called #Rubina has Superioroty Complex Too! 🤣😂

This FREINDSHIP is now HISTORY!

#JasminBhasin has shown her true colors today !! Full hypocrite and snake forsure !!#Rubinadilaik was always in support of Her but still she spoiled frndship by her devil nature !!

#JasminBhasin is looking like the worst friend rn. Except for the fact that she humiliated her bestfriend infront of all the housemates when asked for a guess about who will get eliminated she took #RubinaDilaik 's name. (1/2)

With this, all we would like to say is that from now on there will be trust issues between Jasmin and Rubina and their friendship may even turn bitter. Meanwhile, on last night's episode, we saw Shardul Pandit getting eliminated from the show whereas Rubina was saved by the audience. Stay tuned!

(The above story first appeared on LatestLY on Nov 16, 2020 01:08 PM IST. For more news and updates on politics, world, sports, entertainment and lifestyle, log on to our website latestly.com).