Bigg Boss 14: Bipasha Basu Wants Rubina Dilaik To Lift the Winner’s Trophy, Calls Her ‘One Hell of a Strong Girl’

The controversial reality show Bigg Boss 14 is going to come to an end on February 21, 2021. As the race to the trophy is nearing, contestant Rubina Dilaik has found love and support from none other than Bollywood actress Bipasha Basu. Check it out. 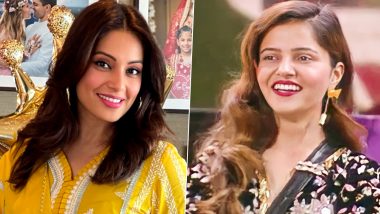 The controversial reality show Bigg Boss 14 is going to come to an end on February 21, 2021. Currently, Nikki Tamboli, Rakhi Sawant, Rubina Dilaik, Devoleena Bhattacharjee (as Eijaz Khan), Aly Goni and Rahul Vaidya are fighting for the trophy. And as we are nearing the grand finale, many supporters are rooting for their favourite contestants. Talking on the same lines, Bollywood actress Bipasha Basu, who has been watching the reality show, wants Rubina to win. Bigg Boss 14: Nikki Tamboli Becomes the First Finalist, Thanks to Rubina Dilaik!

Taking to her social media, the Raaz actress mentioned that she watched Bigg Boss 14 and is impressed by Rubina. That's not it, as the star also added that Dilaik should win the reality show as she is one strong woman. As soon as, Bips flashed her stance for Rubi, fans of the Shakti actress started to pour in thank you messages for her. Well, looks like Rubina is surely being admired by many. Bigg Boss 14: Rakhi Sawant Enters the Finale Week, Also Adds Rs 14 Lakh to Her Bank Balance – Reports.

Meanwhile, in last night's (Feb 11) episode, we saw, how Rubina won the ticket to finale task and also passed her win to friend Nikki Tamboli. Earlier, when Farah Khan had entered the reality show as a judge she has also praised the Television star Rubina for being opinionated.

With just a few days for the finale, such mention by B-town stars does make a difference. Also, Rubina's fan following is immense and she has been ruling the micro-blogging site from the day she entered the show. Her loyal fans always are with her. Stay tuned!

(The above story first appeared on LatestLY on Feb 12, 2021 04:57 PM IST. For more news and updates on politics, world, sports, entertainment and lifestyle, log on to our website latestly.com).