Anything and everything can happen on the controversial reality show, Bigg Boss and the ongoing ticket to finale task inside the house is the latest example of the same. As Paras Chhabra has shown his true colours and has made Rubina Dilaik the winner of the task. However, there is a twist to the tale. Read on, 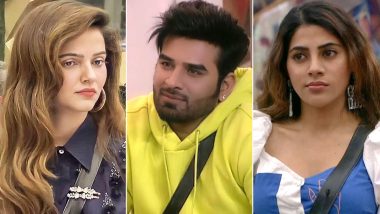 Anything and everything can happen on the controversial reality show, Bigg Boss and the ongoing task inside the house is the latest example of the same. As reportedly, Paras Chhabra has shown his true colours and has made Rubina Dilaik the winner of the ticket to finale task. FYI, Paras was the sanchalak of the task and so his decision was the final verdict. The last call in the task was between Rubina and Rahul Vaidya, but Paras made the former the winner. But there's a twist to the tale... read on. Bigg Boss 14: Salman Khan’s Reality Show Not Good for Mental Health? Behavioural Scientists Compare Life in the House Like Living in Prison.

As we all know that Rubina has been nominated for the entire season as she had harmed Rakhi Sawant by throwing a bucket full of water on her. Bigg Boss gave her a special privilege to pick any contestant, who she thinks deserves her ticket to finale. And as Abhinav Shukla is eliminated from the show, her preference was Nikki Tamboli. With this, Nikki becomes the first finalist of the season. Bigg Boss 14: Rahul Vaidya’s Girlfriend Disha Parmar To Enter the Reality Show on Valentine’s Day – Reports.

This decision of Paras has earned him positive and negative review online. As some are lauding his attempts for Rubina, while, a few are slamming him for doing wrong with others. But if you've followed Bigg Boss 13, where Paras was a contestant, he was a game-changer that time and the same trait he showed on Bigg Boss 14 too. Another benefit here is that since Rubina's fan following is immense, even Chhabra will benefit from the same. Smart! Bigg Boss 14: Jasmin Bhasin and Rubina Dilaik Get in Ugly Catfight During the Ticket to Finale Task (Watch Video).

We are damn excited to watch tonight's episode. Also, we want to know your thoughts on Nikki winning the ticket to the finale? Does she deserve it or not? Did Rubina's move to pass on her finale ticket to Nikki was right? Tell us your view in the comment section below. Stay tuned!

(The above story first appeared on LatestLY on Feb 11, 2021 06:55 PM IST. For more news and updates on politics, world, sports, entertainment and lifestyle, log on to our website latestly.com).