Here comes a big news for all Bigg Boss lovers as reportedly, Naagin 3 fame Surbhi Jyoti has been approached to be part of the reality show's upcoming season. Check it out. 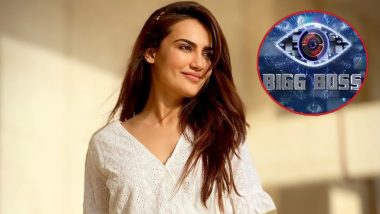 Love it or hate it, but Bigg Boss happens to be one of the most-watched reality show across the globe. From nasty fights, some romantic moments, Salman Khan's hosting to ofcourse the interesting line up of contestants each year, fans are always eager about this show. Now, as per the latest news, looks like the current pandemic has not at all affected the makers of Bigg Boss, as they've already started the initial preparation for the reality series. Yep, you read that right. As according to SpotBoye, the production house has started making calls and getting celebs on-board. Well, that's not it as the gossip scoop is that Naagin 3 lead Surbhi Jyoti has been approached for the show. Bigg Boss 14 To Feature Commoners Again And Auditions To Kickstart In May 2020? Read Details.

Reportedly, the TV actress has been phoned by BB 14 makers. However, this is not the first time the actress has been called to be part of the controversial show. As from past many years they have been trying to sign Surbhi Jyoti but the actress has always declined the offer. Salman Khan Announces The Next Season of Bigg Boss, And Also its Tentative Time.

Earlier, in an Instagram live session with the entertainment portal, Jyoti had opened up on why she never says yes to reality shows. Surbhi had said, "I don't think I will ever do a reality show because I don't have that competitive spirit in me. The only thing I enjoy doing is acting; aur pressure mein to mujhse acting bhi nahi hoti. Since I can’t handle too much pressure, main bahut aaram se apni cheeze karna pasand karti hoon.” Are Bigg Boss 14 Auditions Happening In May? Narrator Vijay Vikram Singh Debunks Latest Rumour on Salman Khan's Reality Show.

The report further states that the Naagin babe has given a nod to the show or not still remains a mystery, but also adds that the 'production house is being extra persistent this time with her.' Well, Bigg Boss 14 is also supposed to air in the third week of October on Colors. FYI, it was television heartthrob, Sidharth Shukla who was the winner of Bigg Boss 13. Stay tuned!

(The above story first appeared on LatestLY on May 27, 2020 03:43 PM IST. For more news and updates on politics, world, sports, entertainment and lifestyle, log on to our website latestly.com).