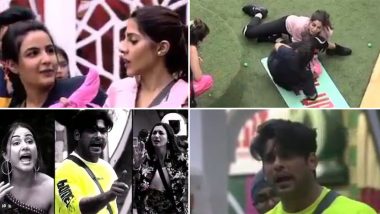 As the mentors rule the house and contestants fight for their survival, Bigg Boss 14 is getting better with each passing day. Until now, we have seen many fights on the current season, but the one we witnessed between Hina Khan, Sidharth Shukla and Gauahar Khan on today’s (Oct 16) episode was quite a bomb. The seniors lock horns during a task wherein both shout and yell at each other. That’s not it, as tonight’s episode also saw Jasmin Bhasin killing it with her attitude in the task against the confirmed inmate Nikki Tamboli. In case, you’ve missed the scoop, read on. Bigg Boss 14 October 15 Episode: Sidharth, Hina Throw Gauahar in the Pool, Nishant Climbs a Tree - 5 Highlights From BB 14's Day 12.

Bigg Boss introduces a new task which had to be played between two housemates at a time. The task was to collect the maximum number of balls in the basket and the winner will have access to her items from the BB mall. Nikki and Jasmin become the first contestants to play the game. Amid the same, Tamboli starts playing dirty by snatching Bhasin’s basket full of balls and the latter also reciprocates in the same way. Both the girls then try to save their baskets and indulge in a massive verbal fight. Jasmin also calls Nikki gandagi.

Hina and Gauahar Against Sidharth Shukla

After Jasmin and Nikki’s task comes to an end, the mentors had to come up with a decision on who among the two is victorious. To this, while we see Hina, Gauahar supporting Jasmin, on the other hand, Sidharth adds that he wants a draw. This creates friction and we see Hina, Gauahar against Sid. The strong ex-players yell for justice. In the end, as decided by the mentors, Jasmin wins. Bigg Boss 14 October 16 Synopsis: Mentors Hina Khan and Sidharth Shukla Get Into A Heated Argument.

As Hina and Gauahar take decision along with the approval of Sidharth Shukla that Jasmin is the winner, we see Rubina adding 'woman power' and truth triumphs to it. This irks Sid and the man roars. He tells Rubina that this is not woman power and her definition of the same sucks. This erupts in a huge argument between the two. Bigg Boss 14: Twitterati Hails Rubina Dilaik for Making Shehzad Deol Apologise on National TV for Using ‘Chakka’ as a Cuss Word!

Rubina becomes the butt of jokes, as singer Rahul Vaidya imitates her. Right from the TV actress' tone, gestures to even her 'akraman' rant during the farmland task, Vaidya does it exactly right and makes the spectators laugh. Nishant, Hina, Nikki, Jaan and Sidharth were the viewers here.

Gauahar Khan who rules the kitchen area talks it out the contestants and makes them understand that what does kitchen duties look like. She tells Abhinav and Rubina that the person who chops also needs helps as cooking does not only mean to put all the chopped veggies and food ban gaya. It involves help from one and all.

That's it, guys! Friday's episode of Bigg Boss 14 was full of fights and we hardly saw any good moments. Now, let us see what the Weekend Ka Vaar with Salman Khan will be all about. Stay tuned!

(The above story first appeared on LatestLY on Oct 17, 2020 12:01 AM IST. For more news and updates on politics, world, sports, entertainment and lifestyle, log on to our website latestly.com).