After a spectacular Grand Premiere of Bigg Boss 14, October 4, 2020, marks the very first day of the reality show. In case, you’ve missed the first episode of the show, here are five high-points from the same. Read on. 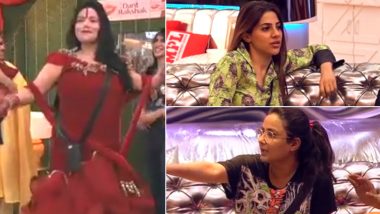 After a spectacular Grand Premiere of Bigg Boss 14, October 4, 2020, marks the very first day of the reality show. Until now, 11 contestants have been locked inside the house and the chaos is all set to begin. On tonight’s episode, we see the first-ever verbal fight between Jasmin Bhasin and Nikki Tamboli. That’s not it, as the toofani seniors (Hina, Sidharth, Gauahar) also reveal the powers they possess and the space they will rule inside the house. The mentors will preach as well as throw challenges for the contestants in the coming week. Even Radhe Maa entered the house and blessed the inmates. In case, you’ve missed the first episode of the show, here are five high-points from the same. [EXCLUSIVE] Bigg Boss 14: Rubina Dilaik Reveals The Real Reason Behind Giving Her Nod To Salman Khan's Reality Show!

The show starts with Bigg Boss welcoming all the contestants as well as mentors to the latest season. Gauahar then reads out the rules from the rule book and makes a big revelation. As per this season, Hina is set to rule the luxuries amenities of the house, Gauahar conquers the kitchen whereas Sidharth takes over the bedroom area. None of the housemates can enter or use any of the above-mentioned space without the mentors permission.

As a mentor, Sidharth Shukla will be ruling the bedroom area and will give access to the contestants only if he wishes to. On tonight’s episode, we see Jasmin Bhasin, Nikki Tamboli, Shehzad Deol begging Sidharth to let them enter the space, use the beds and have a sound sleep. But Sidharth being an ex winner of the reality show plays this in a fun way, but finally gives the inmates the beds. Aww! Bigg Boss 14: Netizens Slam Nikki Tamboli For Being Over The Top, Tag Her Fake (View Tweets).

Speculations were strong that godwoman Radhe Maa is one of the Bigg Boss contestants this year. However, that is not the case. As she is just a spiritual guest. On tonight’s episode, we saw Radhe Maa blessing all the contestants. Sidharth Shukla also went ahead and was seen urging Maa to bless him personally. The most interesting part came in when Radhe Maa also danced her heart out to the inmates tunes. All in all, Radhe Maa Ki Chowki was a hit.

The first huge fight of the Bigg Boss house took place between none other than Jasmin Bhasin and Nikki Tamboli. It all happened that Nikki never wanted to wash utensils and the reason behind the same were her pampered nails (manicure). This led to a verbal argument between the two which also made both the girls cry. Oh no! Bigg Boss 14: Rahul Vaidya Quashes Rumours of Dating Disha Parmar, Says ‘She Is Just a Good Friend’.

Looks like a new friendship or we can say a new blank story is weaving inside the Bigg Boss 14 house, courtesy Punia and Vaidya. As when the other contestants were busy snoring, the two were talking about each other's qualities and profession. They also speak about love.

That was all about the first day first show from the Bigg Boss house. After seeing today's episode, day 1 might be lukewarm and not wow, but we bet, as the episode passes by things will get spicy and dramatic. Stay tuned!

(The above story first appeared on LatestLY on Oct 04, 2020 11:00 PM IST. For more news and updates on politics, world, sports, entertainment and lifestyle, log on to our website latestly.com).