TV actress Rubina Dilaik in an exclusive conversation with us revealed the real reason behind giving her nod for Salman Khan's Bigg Boss 14. Read on. 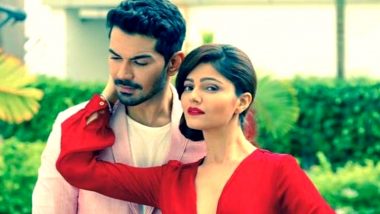 Television's most loved controversial reality show Bigg Boss 14 is back with a bang. Until now, only 11 contestants have made it to the house where every year there are 13 contestants on the show. This time the makers have also added a couple twist by bringing real-life pair Rubina Dilaik and Abhinav Shukla under the same roof. Rubina who is known for her roles on hit serials like Chotti Bahu and Shakti - Astitva Ke Ehsaas Ki before entering the show talked exclusively with LatestLY and revealed what made her say yes to this season. Bigg Boss 14: Rubina Dilaik and Husband Abhinav Shukla’s Phonebooth Romance From the Grand Premiere Night Looks Sizzling Hot (Watch Video).

Dilaik in a conversation with us admitted that she has been approached for Bigg Boss multiple times. However, the real reason she gave a nod this season is her husband Abhinav Shukla. Yes, you read that right. "Okay, so earlier I was approached as a contestant, individually. This time when the call came like you know as a couple. That's what changed the whole dynamic for me," Rubina told us. EXCLUSIVE! Shakti - Astitva Ke Ehsaas Ki's Rubina Dilaik on Mother's Day, 'We Hold an Identity that is a Replica of Our Mothers'.

"I used to be very honest and upfront about the fact that Bigg Boss always works on controversies, arguments and lot more and as a personality, I did not fit the bill. But when they approached us as a couple I kind of took the challenge of taking my private life into a public arena. And that’s what exciting for me. I was like let’s do it," she joyously added.

Well, we couldn't agree more with Rubina as entering a show which has great exposure along with hubby is a great feeling indeed. FYI, while Abhinav has been granted permission to enter the Bigg Boss house by the mentors, Rubina, for now, has been rejected by the trio. Who said Bigg Boss was going to easy? Stay tuned!

(The above story first appeared on LatestLY on Oct 04, 2020 08:17 PM IST. For more news and updates on politics, world, sports, entertainment and lifestyle, log on to our website latestly.com).