Bigg Boss 14 contestants Rahul Vaidya and Rubina Dilaik have never gotten along. While we still do not know what went wrong to begin with between them, their respective attitudes have not helped over time. While the two usually maintain a safe distance from one another, when they get into an altercation, the whole house comes down. 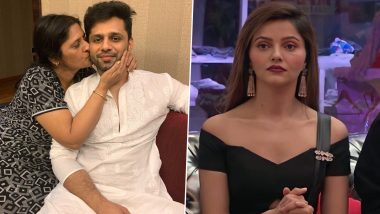 Bigg Boss 14 contestants Rahul Vaidya and Rubina Dilaik have never gotten along. While we still do not know what went wrong to begin with between them, their respective attitudes have not helped over time. While the two usually maintain a safe distance from one another, when they get into an altercation, the whole house comes down. In an episode, Rahul called Rubina authoritative and this did not go down well with Rubina, who had a huge discussion with her. Bigg Boss 14: Rahul Vaidya Rebukes Salman Khan For Calling Him 'Bhaaga Hua Contestant', Host Asks Him 'Aapke Pair Padhke Leke Aaye Hai Kya? (Watch Video).

And now, echoing her son's sentiments, Rahul Vaidya's mother Geeta Vaidya too said that Rubina indeed has a superiority complex and is very authoritative. In a recent interview, she talked about how Rubina and Rahul are cordial with each other only for the game against the challengers and that her son can never be friends with Rubina IRL. Bigg Boss 14: Rakhi Sawant Tears Rahul Mahajan’s Dhoti in a Prank Gone Far; Aly Goni and Rahul Vaidya Condemn the Act (Watch Video).

"I think because of the strategy there is no fight between Rubina and Rahul these days which is fine. But they are poles apart in nature and can never get along or be friends I feel. The moment there is a point where their views don’t match they will again start fighting," revealed Geeta to ETimes TV.

She continued, "I also find Rubina very authoritative. Recently when everyone was sorting out the space issue in the luxury area, she came and stood there with both hands on her hips and started asking everyone with authority. Everyone else was very normal. We felt while watching who she is to ask everyone with that tone. She has that superiority complex and I find that very irritating. I think Rahul and Rubina can only be cordial with each other."

While Geeta Vaidya is okay with Nikki Tamboli, her advice for her son would be to not trust Nikki. She said, "I feel he should beware of Nikki as she can betray him. She is not doing anything wrong because she plays for herself which is not bad. It is good to see that she doesn’t follow a herd mentality and plays her solo game but because of this she can flip any moment. And so I feel he should be careful."

"She calls him her friend but then says there is no friend. So she contradicts herself. Recently, when Salman sir told her that ‘tumhare kandhe par bandook rakh kar koi chala raha hai’ she thought it was Rahul. So let’s see how it goes for both of them," she concluded.

(The above story first appeared on LatestLY on Jan 09, 2021 04:10 PM IST. For more news and updates on politics, world, sports, entertainment and lifestyle, log on to our website latestly.com).