Eijaz Khan, Rahul Mahajan and Abhinav Shukla were asked to get cakes from the storage room and were informed that one of the cakes is bitter tasting. 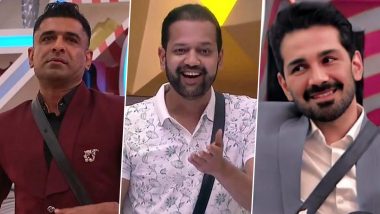 Salman had some fun with the contestants as Dharmesh Yelande and Shehnaaz Gill arrived at the platform of Bigg Boss 14. From shouting slogans to telling which contestant is a boring housemate, the contestants got involved in a lot of fun and heated arguments. By the end of the game, Salman asked the three nominated contestants to stand for evictions.

Eijaz Khan, Rahul Mahajan and Abhinav Shukla were asked to get cakes from the storage room and were informed that one of the cakes is bitter tasting. The three cut the cake to find out that no one has been evicted. Salman says that since it is his birthday and the holiday season is on, he did not want anyone to be evicted. Everyone was happy with the decision. Bigg Boss 14 November 5 Episode: Jasmin Bhasin Becomes the New Captain; Rubina Dilaik Keeps Karwa Chauth Fast for Abhinav Shukla – 5 Highlights From BB14.

Later we saw Aly Gony expressing how he was upset with Nikki Tamboli's behaviour. Rahul and Rubina were seen discussing their winning strategy while talking about how Eijaz cannot be trusted. Things get ugly between Arshi and Vikas over coffee. Vikas gave it back to Arshi and said some really harsh thing to her. Vikas even went on to throw water on Arshi after which she got very upset.

(The above story first appeared on LatestLY on Dec 27, 2020 10:10 PM IST. For more news and updates on politics, world, sports, entertainment and lifestyle, log on to our website latestly.com).