Your daily dose of Bigg Boss 14 is here! Right from Jasmin Bhasin beating Pavitra Punia in the captaincy task and becoming the new captain to Rubina Dilaik-Abhinav Shukla’s cutesy Karwa Chauth celebrations, tonight’s episode was fun to watch. Check it out. 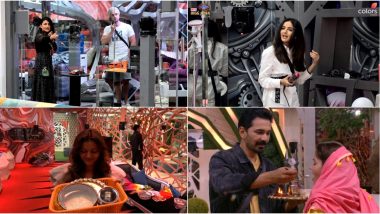 Your daily dose of Bigg Boss 14 is here! Right from Jasmin Bhasin beating Pavitra Punia in the captaincy task and becoming the new captain to Rubina Dilaik-Abhinav Shukla’s cutesy Karwa Chauth celebrations, tonight’s episode was fun to watch. However, the main update from it was the argument between Jasmin and Pavitra in front of Aly Goni. We definitely see Jasmin getting a bit jealous when Punia talks with her pal Goni via the telephone. Just in case, you’ve missed watching BB 14 tonight, fret not, as we’ve got you covered. Here are five highlights from the show below. Bigg Boss 14 November 4 Episode: Pavitra Punia - Eijaz Khan's Differences Hit the Roof, Aly Goni Enters The House -5 Highlights From Tonight's BB14 Episode.

First things first, the Solar System captaincy task continues and the two opponent competing against each other are Jasmin Bhasin and Pavitra Punia. And as soon as the task starts, the two revolve around the sun. Amid this, Punia and Bhasin push each other and well it is Pavitra who loses her grip and falls off. And that's how Jasmin defeats Pavitra and becomes the new captain of the house.

Right after the captaincy task, Rubina and Abhinav Shukla discuss Jasmin and where her loyalties are. The wife explains to her hubby that Bhasin can't be trusted at this moment as she can favour Pavitra. To which Shukla, brings Jasmin in the talk and clears the air. And as expected, Bhasin convinces the couple that they'll both be her first priority.

Pavitra approaches and talks to Aly Goni over the phone about how Shardul Pandit who was playing for Eijaz Khan in the Solar System task is now blaming her and saying if he leaves the show it will be because of her. Punia in her defence says that Shardul never gave her a hint that he is not supporting Eijaz in the task. Amid this Jasmin comes in and tells Punia that if Shardul is her friend from the outside world then she needs no hint from him. This creates an argument between the two where we also see Bhasin being possessive over  Aly-Pavitra’s conversation. Bigg Boss 14: Rubina Dilaik and Abhinav Shukla Celebrate Karwa Chauth and It’s Super Romantic (Watch Video).

Rubina Gets Safe From Nominations

Captain Jasmin Bhasin gets a power to chose three contestants out of the four from the red zone who will fight and get a chance to enter the green zone. Bhasin selects Naina, Rubina and Shardul and ditches Rahul. However, the twist is that the three selected members will not play the game but will choose ones from the green zone to play for them.

Naina Singh chooses Nikki Tamboli to play for her, Shardul Pandit picks Pavitra and Rubina ofcourse Abhinav. The task was all the three need to hold a ring and the last remaining will win and be safe. All the three candidates play it really well and finally, it was Punia vs Shukla. But Abhinav wins the task and brings Rubuina back to the green zone and she also gets safe from the eviction.

The couple locked inside the Bigg Boss 14 house celebrates Karwa Chauth in quite a filmy way. From Abhinav asking Rubina in the morning that has she kept a fast for her, Bigg Boss giving Rubina the samagari for Karwa Chauth to finally the wifey seeing her man and the moon. it was really romantic!

That's it, guys! These were the top five highlights from Bigg Boss 14's episode 25 and we bet it was one of the most entertaining ones till now. Ahead, it will be interesting to see how the coming days will change dynamics and a lot in the house. Stay tuned!

(The above story first appeared on LatestLY on Nov 06, 2020 12:05 AM IST. For more news and updates on politics, world, sports, entertainment and lifestyle, log on to our website latestly.com).