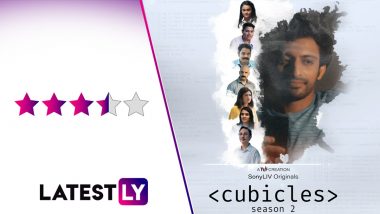 Cubicles season 2 review: TVF has mastered the art of presenting the trials and tribulations of student life with gems like Kota Factory, Aspirants and more. They understand the pulse of what students want or what they are conditioned to. Cubicles series takes the conversion further from classrooms to office floors where competency mapped in ROI. The second season of the web series takes the conversation forward to 'What happens when you get what you want?' OTT Releases Of The Week: Justin Hartley’s This Is Us Season 6 on Disney+ Hotstar, Ben Affleck’s The Tender Bar on Amazon Prime Video and More.

Piyush Prajapati's (Abhishek Chauhan) benchmark for success in the first season was getting his own cubicle. The dream comes true along with an offer from the rival company with a 'handsome' hike. Meanwhile, a highly competitive new joinee in their team Sunaina (Ayushi Gupta) just wants to move ahead by hook or by cook. This impacts Piyush and his colleagues Gautam (Badri Chavan) and Shetty (Niketan Sharma). Piyush has to decide whether to stay with the benefits he always wanted or take up the offer with more money.

Just like its previous season, Cubicles S2 continues to have a lull and easy pace which you don't mind. You realise that's how it's supposed to be. It lets things reach a crescendo before it erupts into some kind of a consequence. You completely rally behind this process of narration as it gives you the climax you are hoping. Cubicles does it smartly without being obvious about it. That's the best part of this series. It never tries to be an extraordinary tale but stays true to the plot and extremely relevant to people who are often termed 'corporate slaves.'

From haggling for a hike to peers trying to edge you out, Cubicles manages to put every occurrence in an office setup. An office boy who knows everything about everyone, a seasoned employee who faffs unapologetically, an HR professional who is the definition of paradox, so on and so forth. You feel connected to each of the characters and all of them are adequately fleshed out.

But we do have grouses here. While the first season highlight the corporate culture and how toxic it can get, the second season gets a little too breezy with more attention to Piyush's journey to his cabin. It does make references to the relationship between an employee and an employer, they don't play out the way you would like it to be. Also, shaming a senior employee for not getting promoted on time should have been called out. There are various reasons a person doesn't get the chance to achieve the heights he/she deserves. Sometimes they are just happy doing what they are and doesn't have cubicle-ambitions. An apology isn't enough here!

We do admit that TVF is just like Vishesh Films of OTT world in regards to music. Their compositions are simply brilliant and so are their BGM scores. But they need to contain the use of songs in their series. At times, Cubicles season 2 seems like a movie divided into six short episodes. Go slow, please! Dhaaga Song From TVF's Aspirants Reminds Twitterati Of Yeh Meri Family But They Aren't Complaining.

Performances of course are solid. Be it Abhishek Chauhan, Ayushi Gupta, Niketan Sharma or Khushbu Baid (the HR), all of them have turned into the characters they are assigned to. It's a 10/10 in the acting department.

-less focus on the corporate culture

Cubicles S2 takes the story ahead pretty well with smart office twists and peer pressure. The series streams on SonyLIV.

(The above story first appeared on LatestLY on Jan 07, 2022 02:02 PM IST. For more news and updates on politics, world, sports, entertainment and lifestyle, log on to our website latestly.com).