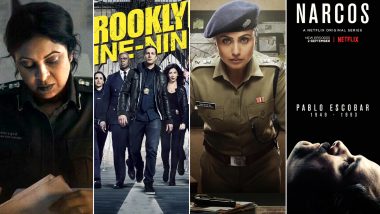 If you have ever tried to stream or download content illegally, this news is of utmost importance to you. As per a report in Mumbai Mirror, Maharashtra Police has started an investigation after receiving a lot of complaints from users. The scammers lure the victims to a website with a promise of offering a TV show or a movie for free, which also installs malware on their devices. The Cyber Police have brought out a list of shows and movies which are high risk and it has prominent names like Ghoul, Delhi Crime, Brooklyn Nine-Nine and many more.  Brooklyn Nine-Nine Will Scrap Four of its New Episodes After George Floyd’s Death, Confirms Actor Terry Crews

The criminals constantly update the list of most favoured shows and movies promising a free download or stream of the same. Cops have found that most of the sites are hosted on proxy servers or VPN somewhere in Uzbekistan, Tajikstan, North Korea and Iraq. Hackers are on a lookout for unsuspecting people who are looking for free streams or downloads of these TV shows and movies illegally. The cops also told the daily that these streams are embedded with pirated video files containing malware.

(The above story first appeared on LatestLY on Jul 02, 2020 12:31 PM IST. For more news and updates on politics, world, sports, entertainment and lifestyle, log on to our website latestly.com).