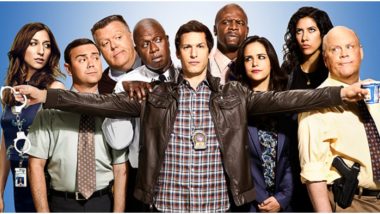 The recent of African-American George Floyd has stirred a new controversy in the USA. The fact that we still need to have hashtags like #BlackLivesMatter in the 21st century is worrisome. While protestors took to US streets to voice their anger and frustration over police brutality against the black people, its impact was felt all over the world. While film studios have condemned the act and actors have been even fired for their old racist tweets, Brooklyn Nine Nine has decided to re-shoot four of its new episodes. Chelsea Peretti Exits Brooklyn Nine Nine and We Feel Like the Human Embodiment of the Heartbreak Emoji.

The very famous Netflix show that revolves around a blundering police force had already started shooting for its eighth season when the George Floyd incident took place. Following which, the makers decided to scrap its first four episodes which probably weren't fair for the black community. Brooklyn Nine Nine actor Terry Crews in his recent conversation confirmed the news by saying, "(We)had four [new] episodes all ready to go and they just threw them in the trash. We have to start over. Right now we don’t know which direction it’s going to go in."

Revealing that the decision wasn't taken in haste, Crews said, "The cast had a lot of sombre talks about it and deep conversations and we hope through this we’re going to make something that will be truly groundbreaking this year. We have an opportunity here, and we plan to use it in the best way possible.” Brooklyn Nine-Nine Star Melissa Fumero Welcomes Second Child, 'Axel' on Valentine's Day (View Pics).

(The above story first appeared on LatestLY on Jun 24, 2020 11:18 AM IST. For more news and updates on politics, world, sports, entertainment and lifestyle, log on to our website latestly.com).