Disha Vakani celebrates her birthday today and to celebrate it along with her, we have curated five memes. Social media is filled with anecdotes of the actress as Dayaben in Taarak Mehta Ka Ooltah Chashmah and these are our personal favourites. 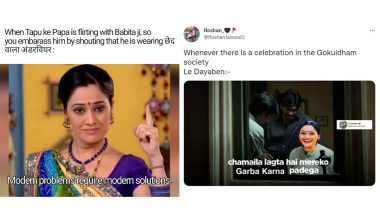 Disha Vakani or as the TV audience fondly calls her Dayaben, turns a year older and wiser. She is simply amazing and unbelievably funny. Before Taarak Mehta Ka Ooltah Chashmah happened, the actress was seen in several cameos in a lot of shows and movies. From Devdas to Jodhaa Akbar, Disha has been part of several projects. While her start has been with a B-grade movie, she has managed to make a place in the audience's mind with her eccentric portrayal of Dayaben in TMKOC. Today, her pairing with Dilip Joshi on the show is nothing short of legendary. In fact, we feel Jethalal wouldn't have been as funny without Dayaben's quirks. No wonder that like him, Deyaben too is a butt of a lot of memes and on her birthday today, we decided to share five of our favourite memes on her character. Disha Vakani Birthday Special: From Debut in B-Grade Film To Being Part of Much-Loved Taarak Mehta Ka Ooltah Chashmah, A Fascinating Look At The Actress’ Career-Graph!

Whenever there is a celebration in the Gokuldham society

Some people need to embarrassed and Dayaben gets it right Whether or not Dayaben or Disha Vakani is returning to TMKOC is unsure. But we can say it confidently that nobody does Daya better than Disha, even CID officer Daya will agree.

(The above story first appeared on LatestLY on Sep 17, 2021 08:20 AM IST. For more news and updates on politics, world, sports, entertainment and lifestyle, log on to our website latestly.com).