Peter Dinklage is a proud man as he was able to beat the likes of Nicolaj Coster-Waldau, Alfie Allen, Michael Kelly, Chris Sullivan, Giancarlo Esposito and Jonathan Banks in the Best Actor Supporting Drama Category for Game of Thrones for the fourth time. 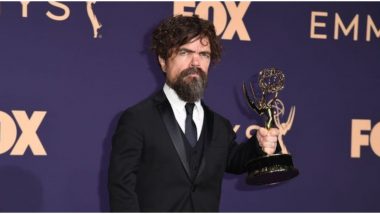 Peter Dinklage is one happy man today and the reason is pretty obvious. The Game of Thrones actor managed to bag his fourth trophy in the Best Supporting Actor Drama category at Emmys 2019 for the same HBO series and this is no small feat. He previously took home the trophy in the same category in  2011, 2015 and 2018. Guess, Peter's win was even predicted by all his fans as they unanimously cheered for him on Twitter without anyone getting disappointed or voicing their displeasure. Emmys 2019 Complete Winner List: Game of Thrones, Fleabag, Chernobyl, Ozark Win Big at 71st Primetime Emmy Awards.

Peter was competing against his own on-screen brother, Nicolaj Coster-Waldau, his co-star Alfie Allen from Game of Thrones and Jonathan Banks, Giancarlo Esposito from Better Call Saul, Michael Kelly from House of Cards and Chris Sullivan from This is Us. Earlier his three-win record was shared with Art Carney, Don Knotts and Aaron Paul. Besides Dinklage, Game of Thrones also took home the trophy for Outstanding Drama Series - a major win, we must say for the makers. Emmys 2019: Fans are Upset after Julia Garner Beats Maisie Williams and Lena Headey in the Best Supporting Actress Category for Drama Series - Read Tweets.

Peter's character, Tyrion Lannister was much loved and appreciated throughout the series and its arch was commendable. We are glad to see him lift the trophy as we personally believe he was the best among all. The GoT makers have ample reasons to celebrate this year as their technical team too managed to score a win with 10 different trophies. They emerged winners in categories related to single-camera picture editing, sound mixing, casting, music composition, main title design, stunt coordination, makeup, costumes, visual effects and sound editing.

(The above story first appeared on LatestLY on Sep 23, 2019 10:20 AM IST. For more news and updates on politics, world, sports, entertainment and lifestyle, log on to our website latestly.com).