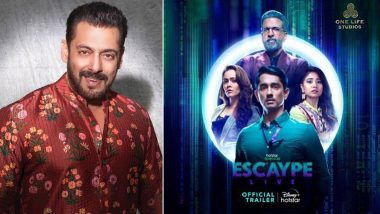 Bollywood superstar Salman Khan recently extended his best wishes to the team of social media thriller series Escaype Live. The actor took to his Instagram and shared a poster of the series. He wrote in the caption, "Big Nite Tonight For You All.. Best Wishes for your new show. #EscaypeLive @waluschaa @sktorigins @rahultewary." The actor also shared the link of the show's trailer in his Instagram bio. Escaype Live Trailer Out! Siddharth, Jaaved Jaaferi, Shweta Tripathi Sharma’s Thriller Series on Dangerous TikTok Culture Streams on Disney+ Hotstar from May 20 (Watch Video).

The show will be available to stream on Disney+ Hotstar from May 20. Salman had also recently shared the first look of his tentatively titled film, Kabhi Eid Kabhi Diwali. He also announced that he will present Kiccha Sudeep's Vikrant Rona. Sudeep, who played the antagonist in Dabangg 3, was recently embroiled in language controversy after he had a Twitter showdown with Ajay Devgn.

(The above story first appeared on LatestLY on May 19, 2022 07:51 PM IST. For more news and updates on politics, world, sports, entertainment and lifestyle, log on to our website latestly.com).