Escaype Live: Siddharth Opens Up About His Disney+ Hotstar Series, Says ‘It Has Been a Great Experience for Me’

Produced under Siddharth Kumar Tewary's One Life Studios, the nine-episode series heavily emphasises the human tendency to be competitive and people's drive to succeed. 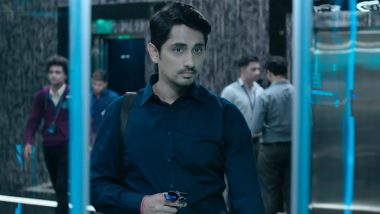 Actor Siddharth, who is looking forward for his upcoming Disney+ Hotstar's 'Escaype Live', is thoroughly impressed by creator Siddharth Kumar Tewary and his passion. Working with Tewari has been an amazing experience for the actor and he shares, "I think one of my biggest motivations while working on 'Escaype Liv'e has been my meetings and interaction with Siddharth Kumar Tewary who is the creator of the show and my namesake. Escaype Live Trailer Out! Siddharth, Jaaved Jaaferi, Shweta Tripathi Sharma’s Thriller Series on Dangerous TikTok Culture Streams on Disney+ Hotstar from May 20 (Watch Video).

"I have been involved with Sid since the day I came on board with this project a couple of years ago and had the privilege of sitting for script discussions, character development with Sid. It has been a great experience for me. I like to know what we are doing, how we are doing it, what I need to give as well to deliver what's expected from me. For all of this, Siddharth has been generous with his inputs, his kindness, his belief."

'Escaype Live' is a fictional story, penned by Jaya Mishra and Siddharth Kumar Tewary, that borders on the true and real. The story features a bunch of content creators, with different paths but one goal - to produce viral content to emerge victorious in a life-changing competition announced by the hottest new app in the country called 'Escape Live'.

Siddharth, the actor, further adds, "Siddharth Tewary has explored many interesting grounds in terms of creating a distinct original Indian fictional character and we kind of bounced off each other and used each of our strengths to achieve things that have been very fruitful. I am really looking forward to where my relationship with Siddharth Kumar Tewary goes from here, in terms of what content we are making. Escaype Live: Aakanksha Singh Opens Up About Her Role as a Cop in the Upcoming Tech-Thriller Web Series.

"What lies ahead with 'Escaype Live'. He is a brilliant mind and he has had a great journey as a director, producer and a writer on television. And I think this is the start of incredible things for him. I can't wait to watch what he has written, then produced and directed. And I am also privy to what all he has in store for the future and can't wait to watch it."

'Dance Rani' story based in Jaisalmer saw the dialogues being penned by Vinod Sharma while 'Amcha's lines were penned by Amol Surve. Similarly, Banaras-based characters of 'Meenakumari and Sunaina's dialogues were written by Ranveer Pratap Singh while 'Darkie and Fetish Girl's dialogues were penned by Jaya Mishra and Siddharth Kumar Tewary. Produced under Siddharth Kumar Tewary's One Life Studios, the nine-episode series heavily emphasises the human tendency to be competitive and people's drive to succeed.

(The above story first appeared on LatestLY on May 09, 2022 05:21 PM IST. For more news and updates on politics, world, sports, entertainment and lifestyle, log on to our website latestly.com).