Saath Nibhana Saathiya fame Rupal Patel aka Kokilaben is not keen on doing the season two of the iconic show featuring Devoleena Bhattacharjee as Gopi Bahu. Read on. 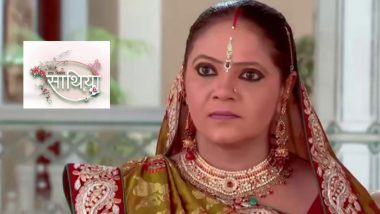 Recently, Star Plus’ iconic daily soap Saath Nibhaana Saathiya once again made headlines after an online creator namely Yashraj Mukhate tweaked Rupal Patel aka Kokilaben’s ‘Rasode Mein Kaun Tha’ dialogue into a rap song. In no time the hilarious clip went viral all over and it was just yesterday when the producer (Rashmi Sharma) of the serial dropped a big news when she confirmed that season two of SNS is on the cards. That’s not it, as the report also stated that Rupal will be reprising her role along with Devoleena Bhattacharjee (Gopi Bahu) on the show. However, in an exclusive conversation with LatestLY, Patel has denied being approached for the show. 'Rasode Mein Kaun Tha' Video Fans Can Rejoice as Saath Nibhaana Saathiya Returns with Kokilaben and Gopi Bahu.

When asked about SNS's season two development, Rupal Patel said, “Actually I have heard about it, but I’m not sure about the same. Right now I’m happy playing the role of Meenakshi Rajvansh on Yeh Rishtey Hai Pyaar Ke on Star Plus.”  EXCLUSIVE: Rupal Patel aka Kokilaben Opens Up On The Viral Song 'Rasode Mein Kaun Tha', Says ' It's Nothing Short Of An Award To See My Audience Entertained By Me'.

When quizzed further that the producer has already confirmed that she and Devoleena Bhattacharjee are part of the daily soap, Rupal replied, “In that case, as I said I’m doing YRHPK and I can’t do two shows together. Also, I have not been yet approached for Saath Nibhaana Saathiya 2 by the makers. However, my good wishes are always with them.”

Later, Rupal Patel also expressed how she is keen on continuing with YRHPK as the trendy Meenakshi and feels blessed to work with fabulous director Rajan Shahi. She also mentioned in the interview how she is currently committed to a show and is not willing to switch. EXCLUSIVE: Giaa Manek Aka Gopi Bahu Reacts To 'Rasode Mein Kaun Tha' Meme , Says 'Within 30 Minutes, My Inbox Was Full Of People Sending Me the Video That Had Gone Viral'.

For the unversed, Saath Nibhaana Saathiya was among the top-rated shows during its time. It ruled the TRP charts for seven years and came to an end in 2017. Rupal Patel played the role of strong-headed woman in the serial aka Kokilben along with Devoleena as Gopi Bahu, Rucha Hasabnis as Rashi and more. Stay tuned!

(The above story first appeared on LatestLY on Aug 29, 2020 01:53 PM IST. For more news and updates on politics, world, sports, entertainment and lifestyle, log on to our website latestly.com).