Producer Rashmi Sharma in her interaction with Mumbai Mirror confirmed this big development and reports suggest Rupal Patel's Kokilaben and Devoleena Bhattacharjee's Gopi Bahu will reunite for this second season. 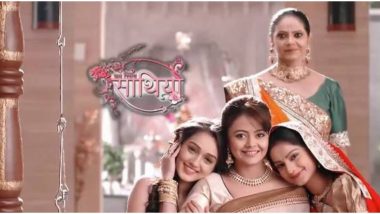 Still humming the viral Rasode Mein Kaun Tha rap? The one that has probably taken over social media and continues to draw in amusing reactions. If yes, we may have good news in store for y'all. Star Plus is all set to return with season 2 of this very popular show and you do know what that means, right? Kokilaben and Gopi Bahu are all set to reunite for this new season and the same has been confirmed by the show's producer. EXCLUSIVE: Giaa Manek Aka Gopi Bahu Reacts To 'Rasode Mein Kaun Tha' Meme, Says 'Within 30 Minutes, My Inbox Was Full Of People Sending Me the Video That Had Gone Viral'.

Producer Rashmi Sharma in her interaction with Mumbai Mirror confirmed this big development by saying, "Saathiya has been a talking point since its launch in 2010. Even after it ended, it remained on top of my mind and we came up with some ideas on how we could take it forward. During the lockdown, its reruns were widely watched and that made us believe this is a good time to bring it back with a new season. Its recall value is still very strong. There will be many new characters and a twist in the storyline, but it will remain a family show and be driven by relationships." Well, we don't deny that the time is really good for its new season's announcement es[ecially since 'khali cooker gas pe chadha diya' refuses to leave our minds. Kokilaben's Viral 'Rasode Me Kaun Tha' Song Has Chef Vikas Khanna Crack Up! (Read Tweet).

However, the new season won't mark Gia Manek's (original Gopi Bahu) return to the show. Bigg Boss 13 contestant Devoleena Bhattacharjee will reprise her role along with Rupal Patel. In fact, the actress has already shot for its promo and the makers are looking for a pre-Diwali premiere on the channel.

(The above story first appeared on LatestLY on Aug 28, 2020 10:17 AM IST. For more news and updates on politics, world, sports, entertainment and lifestyle, log on to our website latestly.com).