Some Twitter users showed their disapproval over this scandalous behavior of the contestant, while many others are not ready to buy this incident as they are not convinced that it's an impromptu happening but feel that the entire episode was a rigged effort to earn TRPs. So, was releasing the promo, showcasing the obscene act of the contestant, an effort to garner good TRPs? 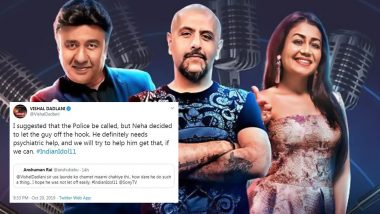 Was releasing the promo, showcasing the obscene act of the contestant, an effort to garner good TRPs? (Photo Credits: File Photo)

The 11th season of Sony TV's popular music reality show, Indian Idol, commenced only a few days back, but the show has already courted controversy. That's right! Recently, the channel had dropped the latest promo of Indian Idol 11 online and it instantly went viral. The video raised many eyebrows, as it had one of the contestants on Indian Idol 11 forcibly hug and plant a kiss on judge Neha Kakkar's cheeks without her consent. Soon after the promo was released, fans of the singer took to the micro-blogging site (Twitter) to criticise the contestant for his obscene behavior. Indian Idol 11: Neha Kakkar Left Baffled after a Contestant Forcibly Kisses Her on Stage

There are reports surfacing on the web claiming that the host of the show, Aditya Narayan, and other judges were outraged over the incident. Vishal Dadlani even suggested to Neha Kakkar that the cops be called, but the latter decided to let the guy off the hook. Indian Idol 11: Neha Kakkar Forcefully Kissed By Contestant, Netizens Feel Move Was Scripted for TRPs

One of the users, slamming the contestant, wrote on Twitter, "@VishalDadlani sir uss launde ko chamet maarni chahiye thi. How dare he do such a thing. I hope he was not let off easily." Responding to this, Dadlani took to social media to leave a comment on this tweet. It read, "I suggested that the Police be called, but Neha decided to let the guy off the hook. He definitely needs psychiatric help, and we will try to help him get that, if we can. #IndianIdol11. (sic)" 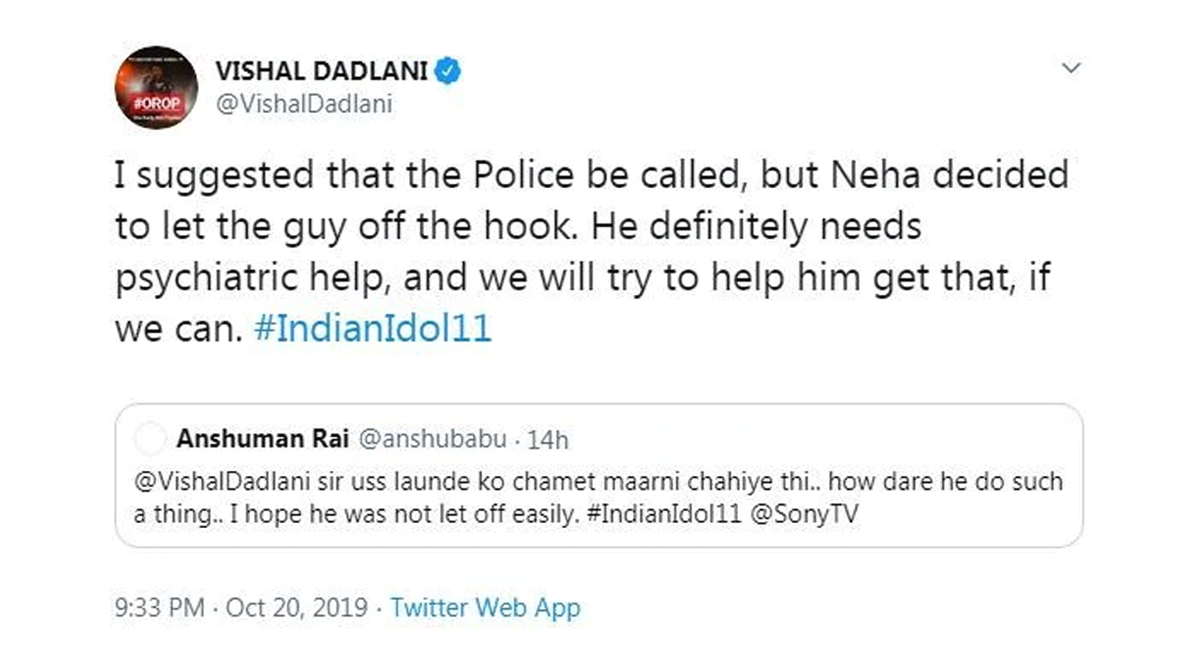 This is ironical since one of the judges on the same panel is Anu Malik, who himself has been accused of #MeToo prior to the commencement of this new season. From Katy Perry to Neha Kakkar, When Harassment and Physical Abuse on Reality TV Shows Sparked Controversies

Adding to the whole controversy, there are other fans of the show who are not convinced that it's a genuine incident but feel that the entire episode is rigged so as to earn TRPs.

Look, I definitely do not want to believe that this stunt was designed to garner TRPs, as certain netizens are suggesting. Indian Idol 2019: Who Are the Judges and Host? Is Neha Kakkar Indian Idol Winner? What Is the Age Limit to Participate & Other Questions Answered

That said, it is quite difficult for me to trust the channel on this. Despite such an outrageous incident happening during the shoot, the showrunners not only decided to air the episode (which will air this weekend on Sony Entertainment Television at 8 PM) with that segment, but they also released the promo with this scene with an intention to make it go viral.

In such situations, the first thing to do is to protect the modesty and dignity of the person affected - in this case, Neha Kakkar. Instead, what the channel did is that they filmed, edited and circulated the incident as a clip just to make it all sensational and generate buzz for the reality show. This is as cheap and disgusting as the alleged action of the contestant. While this is my opinion, you are welcome to share your thoughts in the comment section below. Stay tuned!

(The above story first appeared on LatestLY on Oct 21, 2019 06:51 PM IST. For more news and updates on politics, world, sports, entertainment and lifestyle, log on to our website latestly.com).