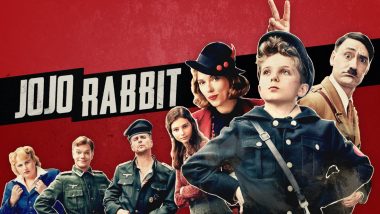 The film revolves around Johannes "Jojo" Betzler, a Hitler Youth member who finds out his mother (Scarlett Johansson) is hiding a Jewish girl (Thomasin McKenzie) in their house. The film shows Jojo having fun interventions with his imaginary friend who is a cheery Adolf Hitler. The film shows Jojo's dilemma about understanding the true meaning of nationalism and finds himself questioning the Nazi ways.

The film is 108 minutes long and is now available for streaming on Hotstar. Those having a subscription to the Hotstar premium account can begin streaming the film for free on the platform. Jojo Rabbit Movie Review: Scarlett Johansson, Roman Griffin Davis Shine in Taika Waititi’s Splendid Blend of Coming-of-Age Drama and Anti-Nazi Satire.

Check out the Trailer of Jojo Rabbit Here:

Hotstar is set to bring some big films to the streaming platform this month. Apart from Jojo Rabbit, other June releases for the platform include Matt Damon and Christian Bale starrer Ford V Ferrari, and Artemis Fowl.

(The above story first appeared on LatestLY on Jun 03, 2020 11:25 AM IST. For more news and updates on politics, world, sports, entertainment and lifestyle, log on to our website latestly.com).