Loki Episode 2 Ending Explained: Who Is Lady Loki and How Did She Bomb the Sacred Timeline? (SPOILER ALERT) 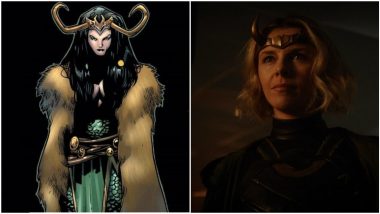 Episode two of Loki delivered some much needed answers as slowly through its episode it kept untangling its time bending plot. Seeing Loki and Mobius team up as they plan to take down the Loki variant resulted in a really fun episode that built up the world of Marvel Cinematic Universe (MCU) while explaining some of its timeline shenanigans. It delved heavily into how the Time Variance Authority (TVA) works and developed most of its supporting cast, especially Mobius who showed off his impeccable chemistry with Loki, no doubt that this duo might be one of the favorites among the MCU. Loki Episode 2 Recap: 5 Highlights From the Second Episode of Tom Hiddleston’s Disney+ Marvel Series.

Loki even answered the question of who the Loki Variant actually is and what they have been up to. After finally tracking down their location to 2050 Alabama where an apocalyptic hurricane is taking place, they enter into a store as they find one of the captive TVA agents taken by the Variant at the beginning of the episode who reveals that she gave away the location of the Timekeepers to the Variant.

Loki and the Variant even have a brief discussion and scuffle as Loki wants the variant to join his ranks as he takes over the TVA but the Variant has plans of their own. The Variant finally reveals herself to be Lady Loki, played by Sophia Di Martino, as she bombs the Sacred Timeline by detonating multiple time reset charges at one which result in the creation of different branches in the Sacred Timeline. She then escapes into a a Nexus Point with Loki following her as the episode ends.

The episode creates some really interesting scenarios for what’s going to come about in the next episode of Loki with the introduction of this character.

Who is Lady Loki?

Lady Loki is a character from the Thor comics and was introduced in the year 2007. As Ragnarok destroys all of Asgard and its people, the souls of the Asgardian people find their new hosts on Earth. Loki’s soul takes over the body of a woman thus resulting in Lady Loki. Lady Loki reveals to Thor that she is done with her mischievous ways and just wants to be happy, but that turns out to be far from the truth as she immediately starts scheming with Doctor Doom. With the introduction of Lady Loki in the MCU they might be hinting at a different Ragnarok in a different timeline which would follow the same origin of the character as listed above, but maybe for the show they might change the origin to fit its story. Whatever that may be, Loki has us intrigued as we can’t wait to find out what comes next. Loki Episode 2 Recap: From Lady Loki to the Timekeepers, 5 Questions Raised by Tom Hiddleston’s Marvel Disney+ Series, Answered!

How Did She Bomb the Sacred Timeline?

The ending of the episode also finds Lady Loki bombing the Sacred Timeline as she detonates multiple time reset charges at the same time resulting in there being different branches in the time and disrupting its flow. She acquires those charges by stealing them from the TVA soldiers who are sent to hunt her down. By doing, she manages to inflict multiple breaches on the Sacred Timeline, and thus creating a multiversal world. What's her endgame is clearly unknown for the moments, but what she did would definitely bring the mysterious Time-Keepers into action. Loki streams every Wednesday on Hotstar Disney+ at 12:30pm.

(The above story first appeared on LatestLY on Jun 16, 2021 11:20 PM IST. For more news and updates on politics, world, sports, entertainment and lifestyle, log on to our website latestly.com).