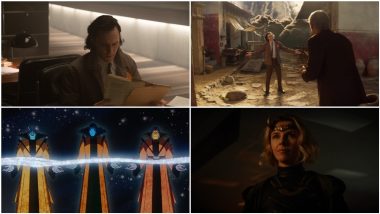 The second episode of Loki debuted on Disney+ Hotstar on June 16 and it told us a lot - From The Timekeepers to who the Loki Variant actually is, while also raising some new interesting questions of its own. The episode borrowed a lot of elements from the comics and introduced concepts pertaining to the multiverse and branching timelines. It touched on a lot of interesting concepts that could create some interesting new scenarios for future episodes.. Loki Episode 2 Recap: 5 Highlights From the Second Episode of Tom Hiddleston’s Disney+ Marvel Series.

So with a lot of new concepts being introduced in the first two episodes of Loki, here’s an explanation for them all.

What is a Nexus Event?

A Nexus event is basically when an individual messes with the timeline, they create a fracture in the sacred timeline which could lead to the end of time. It could stem from anything, from a huge thing like someone dying to the smallest thing like someone accidentally spilling coffee. The sacred timeline is really fragile in these matters and hence why the TVA exists to course correct it.

Who are the Timekeepers?

The Timekeepers in Loki are divine beings who have infinite knowledge about time and keep a track of what all is happening in the timeline. The Timekeepers also act as a custodian of time itself and provide their chronal energy to the TVA.

What are the Time Reset Charges?

The Time Reset Charges are devices used by the TVA agents that help in resetting the timeline of a place that might have been disrupted. They are used to thwart Nexus events so that there isn’t any fracture in the timeline and the sacred timeline moves as it’s supposed to.

Who is Lady Loki?

At the end of episode two of Loki, the Loki Variant is revealed to be no one other than Lady Loki played by Sophia Di Martino. She is the one who has been causing disruption in different timelines and causing the TVA all the problems. Who Lady Loki exactly is in the show and what her role and plan is remains to be a mystery, but Lady Loki as a character was introduced in the comics back in 2007. She was introduced in the 2007 Thor run written by J Michael Straczynski. After Ragnarok takes place and destroys Asgard, the spirits of the people of Asgard find new hosts on Earth, and for Loki that host happens to be a woman hence taking the form of Lady Loki. With the introduction of Lady Loki in the MCU it might be hinting at a second Ragnarok taking place in a different timeline as the origins of this character is directly linked with that event. So maybe Loki might bend her origins to fit the show's narrative, but there is no doubt about the fact that it’s eventually going to lead into Thor somehow.

(The above story first appeared on LatestLY on Jun 16, 2021 06:01 PM IST. For more news and updates on politics, world, sports, entertainment and lifestyle, log on to our website latestly.com).