On June 16, the second episode of Loki dropped online. So with all the timeline shenanigans that Loki has been up to in his show, we are taking a look at five of the highlights from today’s episode of Loki. 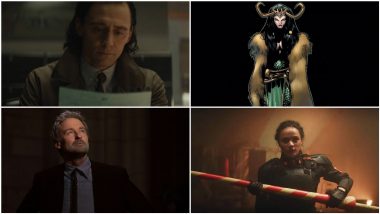 On June 16, The second episode of Loki debuted on the streaming platform of Disney+ Hotstar and there are a lot of things to unpack here. It followed Loki and Mobius as they tried uncovering the mystery behind the Loki variant and eventually capture the variant as well. The episode showcased the chemistry between Loki and Mobius in full force as this duo will probably be one of the favorites among the MCU fans. It also delved more into what the Time Variance Authority (TVA) actually is and what’s their purpose while explaining more about their tools and how the timeline works. Loki Episode 1: Seven Highlights from the Premiere of Tom Hiddleston and Owen Wilson’s Disney+ Marvel Show.

So with all the timeline shenanigans that Loki has been up to in his show, we are taking a look at five of the highlights from today’s episode of Loki.

Taking place in 1985 Wisconsin and showcasing a bunch of TVA agents as they close in on the Loki variant’s location, they are quickly ambushed by the variant while the song “Holding out For a Hero” plays in the background. It was a great opening as it set the tone for the episode and what’s about to come. It ends with the variant taking a TVA agent as a hostage and gives us a look at how smart this Loki Variant really is.

While investigating the attack of the agents by the Loki Variant, Loki tries explaining what the plan of the Variant actually is in a way to manipulate the TVA and escape. But just as he is explaining the plan to Mobius, he calls Loki’s bluff and exposes his lie resulting in him outsmarting Loki. It developed Mobius as a character and showcased how smart he actually is.

Loki Finding About Where the Variant is Hiding

While Mobius gives Loki the task to figure out where the variant might be hiding he figures it out by finding out a loophole in the TVA’s security. He does that by stumbling upon a file detailing Ragnarok and how there was zero variance energy detected there. This leads him to forming the theory that the variant might be hiding among any natural disaster which would hide them very easily

In order to prove the zero variance energy theory, Loki and Mobius travel to 79AD Pompeii as they go there to witness the end of civilization. Over here Loki creates a scene and Mobius detects any variance energy and finds none thus proving that Loki was right. It’s just a really fun scene that showcases us this disastrous event and is filled with great acting and visuals. Loki: From Multiverse to 'DB Cooper', Fan Theories That Were Confirmed in the First Episode of Marvel’s New Disney+ Series (LatestLY Exclusive).

The Reveal of the Loki Variant

Traveling to Alabama in 2050 amidst a climate disaster, TVA agents and Loki finally track down the location of the Loki variant. After a brief encounter with the variant disguising itself as other people, Loki details his plan to the variant by telling how he wants to take over the TVA but the Variant has plans of their own. Then after setting off a bunch of time reset charges and creating a huge fracture in the timeline, the variant reveals herself to be Lady Loki.

Loki streams every Wednesday on Disney+ Hotstar at 12:30 pm.

(The above story first appeared on LatestLY on Jun 16, 2021 05:12 PM IST. For more news and updates on politics, world, sports, entertainment and lifestyle, log on to our website latestly.com).