Netflix's Rana Naidu Starring Rana Daggubati And Venkatesh, Based On Ray Donovan? Here's All You Need To Know About The Series

Netflix announced Rana Naidu which is said to be an India adaptation of Leib Schreiber's Ray Donovan, a 'fixer' for celebrities. Here's what you need to know about the crime drama series. 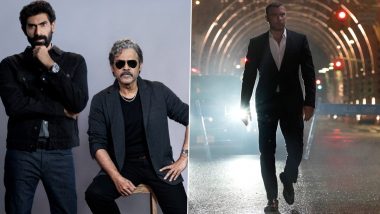 Netflix's announcement about Rana Naidu creates ripples. For one, it got Rana Daggubati sharing screen with his uncle Venkatesh and two, it is said to be based on the hit TV series Ray Donovan. Apparently, Netflix had mentioned it's an official adaptation of the tweet but later deleted it. The American crime drama series starred Liev Schreiber in the lead and began airing on Showtime on June 30, 2013. While Ray Donovan is a pretty popular series which aired in India on AXN, many may not be aware of it. No worries, we got you covered! Rana Naidu: Rana Daggubati and Venkatash Team Up for a Netflix Show Where They Will Play Rivals

As per reports, Rana Naidu will be a go-to-guy for celebrities who are facing issues, preferably illegal. Now, Ray Donovan does the same. He helps celebrities wriggle out of tough messes and has a troubled relationship with his wife while being a great father and brother. Rana Daggubati is probably playing Schreiber's role. Where Venkatesh comes in the picture is probably when Ray's father, a convict, gets released from jail. Things get visibly tough for Ray and our guess is, same will be the case with Rana.

All that makes Rana Naidu extremely promising. India as a location has a highly volatile, troublesome and disturbing entertainment industry which often pays the price for being flawed like all of us.

(The above story first appeared on LatestLY on Sep 22, 2021 06:37 PM IST. For more news and updates on politics, world, sports, entertainment and lifestyle, log on to our website latestly.com).