Kriti Sanon’s Mimi is finally arriving on Netflix and Jio Cinema on July 30. Starring Pankaj Tripathi and Sai Tamhankar, the film is a surrogacy drama directed by Laxman Utekar, the film is big OTT release lined up for July end release. We are going to take a look at the OTT releases of the week 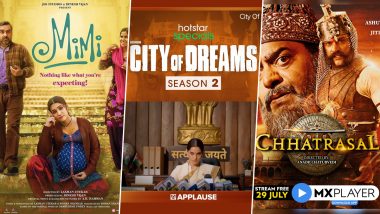 Kriti Sanon’s Mimi is finally arriving on Netflix and Jio Cinema on July 30. Starring Pankaj Tripathi and Sai Tamhankar, the film is a surrogacy drama directed by Laxman Utekar, the film is big OTT release lined up for July end release. We are going to take a look at the OTT releases of the week and there are some interesting movies, series and short films releasing on Netflix, Disney+ Hotstar, Voot, Amazon Prime Video and more. Mimi Trailer: Kriti Sanon And Pankaj Tripathi Win Hearts As Twitterati Praise The Film.

Atul Kulkarni’s City of Dreams Season 2 is another interesting release of the week and it is coming to Disney+ Hotstar on July 30 as well. Ashutosh Rana plays Aurangazeb in MX Player show Chhatrasal which drops on the streaming platform on July 29. Vidya Balan's short film Natkhat is releasing on Voot Select on July 24. Here's a look at highlight films, shows and series that are scheduled to drop in the digital space this week. City of Dreams Season 2 Trailer: Priya Bapat, Atul Kulkarni, Siddharth Chandekar’s Political Drama To Stream on Hotstar Specials From July 30 (Watch Video).

The short film's plot is about a mother educating her young son about gender equality. A story framed within a story where a mother notices her young, school-going son Sonu gravitating towards misogyny and disregard for the other gender just like the men in her family.

An anthology of six short films that explore the theme of 'twists' in the narrative and its various interpretations.

Love in the times of corona (Short film on Voot Select, July 27)

Backed by joyous and magnanimous storytelling, explores the current turbulent time when the whole world is reassessing what's most important in their lives with a deeper understanding.

Set in 1649, the series follows the story of King Chhatrasal who started a war against Mughal emperor Aurangzeb to free Bundelkhand.

Set in 1999, the film chronicles the life of a young girl who is divided by borders with her husband and how she returns to him.

This comedy-drama film is about a young woman who decides to be a surrogate for an American couple and has to face opposition from society for it. The film is a remake of the National Award-winning Marathi film "Mala Aai Vhhaychy".

An assassination attempt splits open the cracks within the Gaikwads, a prominent political dynasty in Mumbai. Season two follows Poornima Rao Gaikwad as she navigates her position as the new Chief Minister of Maharashtra and battles her acrimonious father in a political power struggle.

The film is based on one of the most celebrated masterpieces of author Ismat Chughtai "Lihaaf". The film will throw light on the same-sex love and freedom of speech for women, in a male-dominated society.

(The above story first appeared on LatestLY on Jul 25, 2021 11:26 AM IST. For more news and updates on politics, world, sports, entertainment and lifestyle, log on to our website latestly.com).