Parth Samthaan Shares a Sizzling Photo With Khushali Kumar Captioning It ‘Yes, It’s Her’, Fans Speculate If the Two Are Dating 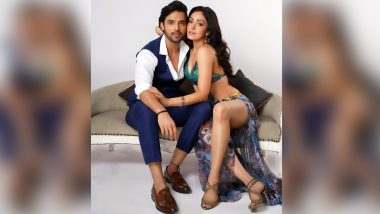 Parth Samthaan always makes it to the top headlines for not just his work but also his personal relationships. The actor, for the longest time, was linked with his Kasuatii Zindagi Kay co-star Erica Fernandes and his fans got to read a lot about the two from time to time. But the rumoured couple recently parted their ways and it looks like Parth has a new lady love in his life. The actor took to social media to post a picture with him as well. Parth Samthaan Creates A Storm On Twitter And We Wonder What The 'Shoor' is All About!

Parth is seen wearing blue formals that he has paired with a white shirt. He looks handsome in a brushed back hairstyle and the brown shoes that he has paired with the look. Khushali is seen leaning on him and one can easily see their oozing chemistry in this picture. The actress wore a printed blue bikini top and thigh-high slit skirt to complement Parth's look. Parth captioned the photo saying, 'Yes, it's her," while Khushali did the same.

Fans started to speculate if the two are dating and flooded Parth's comment section with questions about his relationship status. One user even went on to ask if he is getting married to Khushali. But while it may look like the two have found love in each other, let us tell you that this post was just to tease the fans about Parth and Khushali's upcoming song which is reportedly titled "Shoor". Parth Samthaan Is Dying to Meet His Dream Girl ‘Pooja’ for a Date, But She’s Blowing the Kasautii Zindagii Kay 2 Star Off!

The two had shot for the song on the beaches of Goa last year and it looks like the makers are finally ready to release it for the fans to enjoy. Earlier, many behind-the-scenes photos and videos of Parth had also floated online in October last year when the actor was shooting for his new song. Now, the wait is for the two to make an official announcement of the song soon!

(The above story first appeared on LatestLY on Jan 11, 2021 04:11 PM IST. For more news and updates on politics, world, sports, entertainment and lifestyle, log on to our website latestly.com).