Parth Samthaan Creates A Storm On Twitter And We Wonder What The 'Shoor' is All About! (View Tweets)

Is Kasautii Zindagii Kay 2 fame Parth Samthaan doing a music video? Well, that is what netizens are talking about along with proof. Check it out. 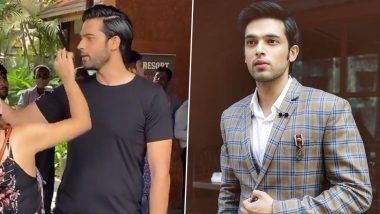 Kasautii Zindagii Kay fans were heartbroken when they got to know that the daily soap is finally going to come to an end. The last episode of Parth Samthaan (Anurag) and Erica Fernandes' (Prerna) love saga was aired on October 3. Ever since the same, Samthaan admirers are desperate to see the actor back in action. While Parth does has web-series Main Hero Boll Raha Hoon in his kitty, looks like there is something more coming on the way. As on October 22. 2020, Parth Samthaan started trending on Twitter and the reason behind it will make you happy for sure. Mai Hero Boll Raha Hu Teaser: Parth Samthaan Turns into a Fierce Gangster In This ALT Balaji Web Series and It Sure Looks Interesting as Hell! (Watch Video).

Well, netizens have gotten their hands on some leaked pics of Parth from Goa where he can be seen shooting. In the frame, the actor is unrecognisable in a bearded look. And since then his fans have taken social media by storm and have been speculating that he is shooting for a music video titled as Shoor. We wonder, what's the reality? Check out a few fan tweets below. Parth Samthaan Admits Going Through Depression and Sadness Amid the Lockdown, Sends Out Positivity to All (View Post).

This is giving me the "Sun bey Pappu" feel 😈

Bts of his new MV😍 @LaghateParth

He looks so handsome in this outfit 😭

However, fans of Parth have said it all via their tweets, there has been no official confirmation by the actor yet. Recently, Samthaan had treated his Instagram fans with a then and now picture of himself and social media went all crazy behind it. Coming back to Shoor, what do you think? Stay tuned!

(The above story first appeared on LatestLY on Oct 22, 2020 08:37 PM IST. For more news and updates on politics, world, sports, entertainment and lifestyle, log on to our website latestly.com).