Actress-turned-producer Bhairavi Raichura's 24 Frames Production has helmed the digital series which will be exclusively available on ZEE5. Directed by Nandita Mehra, written by Nikita Dhond, Gautam Hegde and Ritu Bhatia, 'Pavitra Rishta...It's never too late' Season 2 will premiere on ZEE5 on January 28. 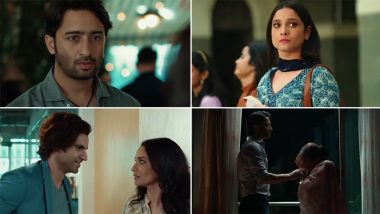 The makers of 'Pavitra Rishta...It's never too late' have dropped the trailer of its second season and actress Ankita Lokhande says her character Archana is like second skin to her. Ankita said: "Shooting for 'Pavitra Rishta' is like coming home as Archana's character feels like second skin to me. This show changed my life back in the day and this time around too, it has proven extremely lucky for me as it has reinstated my faith in love, second chances and that 'It's never too late'. " Pavitra Rishta 2: Streaming Date, Cast, Trailer, Where To Watch – All You Need To Know About Shaheer Sheikh-Ankita Lokhande’s Digital Show!

She added: "So, it gives me immense joy to announce that your favourite show is back with a new season, 8 fresh episodes, same old Archana-Manav chemistry and renewed drama. We hope that you feel the love we felt while shooting for this series". Season 2 is centred around Manav, played by Shaheer Sheikh and Archana, and how their marriage, which was based on a sham, falls apart only for them to realise that their 'Pavitra Rishta' was never bound by just vows and responsibilities. Pavitra Rishta 2: Twitterati Is All Praise About Ankita Lokhande and Shaheer Sheikh’s Earnest Performances in the ZEE5’s Show!

As seen in the trailer, Manav and Archana's story in Season 2 starts from where their marriage ended, and they went their individual ways only to cross paths time and again. Shaheer added: "I was stepping into unknown shoes in the first season but the love from the fans made me realise that there is a Manav in me. Manav's innocence and relatability struck a chord with many hearts, and I hope that the viewers continue to love and accept him in the new season".

Actress-turned-producer Bhairavi Raichura's 24 Frames Production has helmed the digital series which will be exclusively available on ZEE5. Directed by Nandita Mehra, written by Nikita Dhond, Gautam Hegde and Ritu Bhatia, 'Pavitra Rishta...It's never too late' Season 2 will premiere on ZEE5 on January 28.

(The above story first appeared on LatestLY on Jan 18, 2022 03:33 PM IST. For more news and updates on politics, world, sports, entertainment and lifestyle, log on to our website latestly.com).