Rahul Vaidya And Disha Parmar To Marry Soon; Here's Everything We Know About the Wedding!

Bigg Boss 14 runner-up Rahul Vaidya and his girlfriend Disha Parmar are soon to be a married couple. As the singer has revealed in an interview that their marriage is on the cards in the next three-four months. Yay!!! 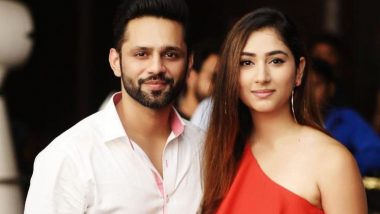 Bigg Boss 14 might have come to an end, but the contestants, who were part of the season are still making news. Let's talk about Rahul Vaidya, who made it to the top two of the reality show. Right from not shying away from proposing Disha Parmar on national TV to making a re-entry on the show like a boss, the singer became a hot favourite for being real on BB 14. Currently, Rahul and Disha are in the dating phase and seem totally into each other. With this, fans also want to know when are the two getting married. Bigg Boss 14’s Valentine Day’s Special: Disha Parmar Says ‘Yes’ After Rahul Vaidya’s Proposes to Her in a Romantic Setting (Watch Video).

And recently, in an interview with Bombay Times, Rahul talked about his wedding plans with Disha. He mentioned that they have not yet zeroed the date for the big day, but will mostly get married in the next three to four months. “We are still in the process of finalising a date, but marriage will happen in three to four months," he told the portal.

Later, he also expressed how low-key wedding is on the couple's mind. He said, “Both of us are calm people. We aren’t fussy at all. I have performed at a lot of weddings and have witnessed all the grandeur, which is why I would prefer mine to be simple and intimate. We will host a function for the fraternity later." Who Is Disha Parmar? Everything You Need to Know About the Actress Bigg Boss 14 Contestant Rahul Vaidya’s Proposed To.

In the same interview, even Disha added that she was surprised to see Vaidya admitting his feelings on the show. She added, "We liked each other, but never spoke about our feelings and he straight away proposed for marriage! It took a little time for things to sink in. Even my family was surprised. I had tears in my eyes while watching the promo. Then I thought about it. There was no way I could have said no. He came out for a week in between and we got an opportunity to discuss it."

(The above story first appeared on LatestLY on Mar 04, 2021 03:27 PM IST. For more news and updates on politics, world, sports, entertainment and lifestyle, log on to our website latestly.com).