Rakhi Sawant seemed annoyed with the costume team and complaint that the dori of her blouse went for a toss after just one dance move. She also added how performers are blamed for the malfunction, but that's not always the reality. Watch viral video. 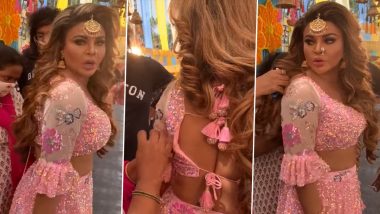 The one and only Rakhi Sawant proved that she's epic by being herself on Bigg Boss 14. She had entered the reality show as a challenger but was loved by fans for serving pure entertainment. Post the show, the actress has been making noise for churning out some funny Instagram videos and more. She was also seen on Colors TV's Holi special show Rang Barse 2021. Talking about it, a video of Rakhi has gone viral on the internet wherein she can be seen saying that she suffered a wardrobe malfunction before her Holi performance. Bigg Boss 14: Rakhi Sawant Tears Rahul Mahajan’s Dhoti in a Prank Gone Far; Aly Goni and Rahul Vaidya Condemn the Act (Watch Video).

In a video, Rakhi seems annoyed with the costume team and complains that the dori of the blouse went for a toss after just one dance move. She also adds that how performers are blamed for the malfunction, but that's not the reality always. She tags the situation as 'tragedy of artistes'. "We are artistes. We should be given tight doris. And then people blame us for creating controversies. Will we get our blouse torn ourselves. My whole unit is waiting for me), " she can be seen saying in the clip. Rakhi Sawant Lands in Legal Trouble, FIR Lodged Against the Actress and Her Brother for Fraud.

Well, she ain't uttering anything wrong in front of the camera, we feel. FYI, Rakhi had performed to Babuji Zara Dheere Chalo on the Holi special episode. Not just her, many prominent faces from TV like Rubina Diliak, Dipika Kakar, Sidharth Shukla, Monalisa, other celebrities were also seen giving some amazing performances. Stay tuned!

(The above story first appeared on LatestLY on Mar 28, 2021 06:10 PM IST. For more news and updates on politics, world, sports, entertainment and lifestyle, log on to our website latestly.com).