Rakhi Sawant Lands in Legal Trouble, FIR Lodged Against the Actress and Her Brother for Fraud

According to several media reports, in a case from 2017, an FIR has been logged in the Vikaspuri police station of Delhi against Rakhi Sawant and her brother. The FIR has been lodged by Shailesh Srivastava, who had invested his money in a project that Rakhi was a part of. 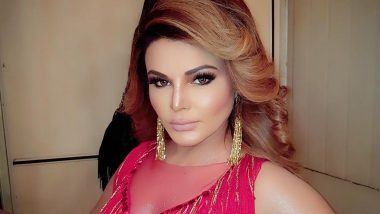 Rakhi Sawant's trouble seems to come to no end. The actress, who has just come out of the Bigg Boss 14 house, has been taking care of her ill mother and has been worried about the finances. Her mother is being treated for cancer and Rakhi, during many episodes of Bigg Boss has expressed how she entered the reality show only to earn some money. While her friends have stepped in to help the actress, she is now facing another legal issue. The actress and her brother, Rakesh Sawant have been accused of fraud and an FIR has been registered against them in Delhi. Rakhi Sawant Wants You to Light Candles and Diyas Tonight at 9 Pm in Her Obnoxious Style Yelling 'Bhag Corona'! And We Wonder If She's Celebrating Halloween.

According to several media reports, in a case from 2017, an FIR has been logged in the Vikaspuri police station of Delhi against Rakhi Sawant and her brother. The FIR has been lodged by Shailesh Srivastava, who had invested his money in a project that Rakhi was a part of. According to the victim, he met Rakhi Sawant’s brother and Raj Khatri with the idea of co-producing a film based on Gurmeet Ram Rahim’s life. It was then that he was told that Rakesh and his partner are also planning to open a dance institute as well. They asked him to invest money in the institute as well.

Rakesh and Raj had told Shailesh that Rakhi being a part of the institute and took money from him. Rakesh and Raj took a sum of Rs. 6 lakhs from Shailesh and gave him a post-dated check of Rs. 7 lakhs for the same. Shailesh went to encash the money to a back but on reaching the bank, he realized that he had been duped with a false signature. On calling the duo, neither of them received his call and have been avoiding him since then. Seeing no other option, Shailesh had to file an FIR against the trio for fraud in Delhi. Rakhi Sawant Accuses Media Of Trying To Put Her In Depression, Reveals Her Wedding Was Fake and Says 'Mai Tumlog Ko Aur Chu**** Banaungi'.

Earlier,  Rakhi Sawant shared a series of pictures from a get-together she had with fellow housemates of the recently-concluded season of the reality show Bigg Boss 14. Vikas Gupta, Nikki Tamboli, Vindu Dara Singh, Jaan Kumar Sanu, Sonali Phogat and Rahul Mahajan can be seen having a great time in the images Rakhi posted on Instagram. The actress-dancer said after the show ended that she is concerned about the health of her mother Jaya Sawant. She had appealed to her fans to pray fo her mother's well-being.

(The above story first appeared on LatestLY on Mar 03, 2021 02:21 PM IST. For more news and updates on politics, world, sports, entertainment and lifestyle, log on to our website latestly.com).